We were up at a good time to meet up with a former work colleague of Kim’s. He lives here in San Francisco and we arranged to have some lunch with him.

He picked us up in his car and said he wanted to show us some places before we had lunch.

We drove through Golden Gate park whilst we chatted about our travels and some other things.

We drove through the park, which is incredibly huge and even houses Bison and sometimes does concerts.

We got to the waterfront and found somewhere to park before strolling around a little bit.

We stopped for lunch at a diner called Louis’ which has been open since 1937 and still only takes cash, which is quite cool.

Kim had a turkey BLT and Curtis had eggs benedict with ham.

We finished up our lunch and hopped back into the car.

We drove to the golden gate bridge to get photos of it as well as photos of Alcatraz. The weather was amazing and apparently it is rare to see everything so clearly.

We were driven to downtown and shown around various places. There were some St. Patrick’s day festivities going on so it was quite busy, but we were shown a few different places which was great!

We said goodbye to our friend and were very thankful for him showing us around.

We stayed downtown and went to buy a card to use on the bus. We got a 7 day pass each and we can use this as much as we want on both that and on the ferries and metro, which is perfect! That was just $40 each.

We had a stroll around Fisherman’s Wharf and Pier 39, which were absolutely rammed, but somewhere to walk around.

There were a lot of random shops and restaurants as well as, randomly, some sea lions!

We sat and watched the sea lions for a bit. We thought they were fighting but then it was apparent they were doing something else, so we abruptly left them to it.

We walked around the fisherman’s wharf some more and that area, just wandering around and seeing what’s about. 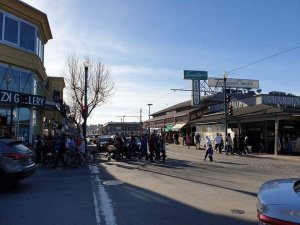 We eventually figured out which bus we needed to take and walked up to the required bus stop, with almost perfect timing!

We got on the bus and sat on it for 45 minutes before getting off the bus a couple of blocks from where we are staying.

We decided KFC was easy for dinner, so we walked for 15 minutes to get it.

We got way too much food, as the sides are so big here, but it was pretty good. We got some chicken, sweetcorn, coleslaw & some ‘biscuits’. We also got a huge chocolate cake for free with our food, for some reason!

We sat and watched TV whilst in a food coma.