We had the hotel breakfast!

We finally managed to actually get up to sample the breakfast and it was certainly different. There were noodles, rice, fruit soup, steamed buns & fried buns.

We only ate steamed buns & fried buns as we couldn’t make ourselves eat noodles at 08:45! The breakfast actually wasn’t bad and there was coffee so can’t go wrong!

We found a temple and went there on the subway. We couldn’t enter the temple as we were wearing inappropriate clothing, but we did see the Pagoda and see the temple from the outside, which was cool!

The area around the temple was much older and we described it as ‘what we expected China to be like’. We weren’t there long and soon went back to the centre to find a dumpling place which is meant to be amazing in China. Yang’s Dumplings is a fast food chain but for dumplings! It was absolutely beautiful. The dumplings were filled with pork but they were incredible. We got 4 and had 2 each and they were fried on one side so it was crispy and beautiful and they were just £0.80!

We came back to the hotel to find a place for dinner and we attempted to get the hotel reception to call and book a reservation at a restaurant as it was required but the phone number didn’t work and they couldn’t find one. This was a shame as it was a 2 Michelin Star restaurant but was cheap!

We found another restaurant which was on the 6th floor of a shopping mall and it was amazing! We had a wonderful waiter and some beautiful food. Our waiter asked (using a translator) if we wanted to sit near the window, so we accepted. We believe we had the best view in the restaurant!

We ordered some food but weren’t entirely sure what we would get, but we ordered the below and all were incredible;

Our view was awesome, even though it was just another building, it still looked cool!
Once we finished food (which was just £11.80!) We walked back towards the hotel, but not before stopping to buy a huge slab of cake from a street vendor for £2.50.

This was our final full day in Shanghai and tomorrow we are leaving to our next location!

We failed to eat breakfast at the hotel again…

We still got up at a decent time, around 10:00 and got up and went for breakfast. Kim fancied waffles and saw a waffle place, so we went there and had waffles with banana and chocolate with a ‘mocca smoothie’.

We were very full from breakfast, but we went back to the hotel room to cool down (it was 41°C today, not including humidity!) And then we headed back out to go to Fuxing Park, which is a large park with not much in, but it was very peaceful. There were people playing cards, people performing Tai Chi. We sat on a bench for a bit and then had a walk around. There were some nice parts to the park for sure!

We went from the park to the nearest metro station, crossing over a bridge with some good views!

We got to the metro and traveled to another place which is actually over the water and went to the Shanghai tower. This tower is the 2nd tallest in the world!

We paid to go to the top of the tower and at the bottom, before we went up, there was a small exhibition regarding it’s height in comparison to other buildings around the world.

We got into the lift and went up. It is so high and fast that your ears actually pop! We stopped on around the 500th floor, where we got out and took some photos from up there! The photos aren’t the best as there is a lot of smog, but it was still a cool experience!

We then got hungry so went back down, hopped on the tube and back to the hotel. We decided to go to the hotel restaurant and ordered spicy beef in chilli oil and spicy chicken.

The spicy beef was very spicy and had a beautiful broth but the chicken was pretty much just bone, which was a little disappointing. We also got some noodles, which cost just £1! For all of that we paid just £8!

Now it is 19:00 and we are going to relax in the air-conditioning as it is much cooler than outside is today!

We were planning to be up early for breakfast (must be up between 07:00 & 09:00) but we ignored the alarm and slept instead. We clearly needed it after our long travels.

Once we woke up we needed to get some breakfast, so we headed to the Shanghai foodmall and found a steamed buns place. We had some pork steamed buns, which were different.

Once we finished our breakfast, we walked to People’s Square and into People’s Park. This is a huge park which has a theme park, a waterfall and just a wonderful calming atmosphere, which was nice as it took us away from the hustle and bustle!

It got very warm today, it was around 35-37°C but also with humidity so making it much warmer!

We finished walking around the park and then came back to the hotel for a little relax and shower (it’s so hot we shower 3 times a day!) then we went back out to find some dinner.

We stopped at the Bund first and took some photos of the incredible building landscape which only gets better when dark!

We found a restaurant and just went in, which is not something we do very often, normally we check it out online first, so it was an interesting idea!

The food was not too bad and we looked fully like tourists not knowing the language as noone spoke English, so we were unsure what we would get, but we got beef noodles & rice & chicken, both were not too bad!

We finished our food and walked down to a waffle cone place which serves ice cream in waffles, so Kim was very excited about that!

We walked back to the Bund and managed to survive the hoards of people to take a photo of the Bund at night, which looks incredible! 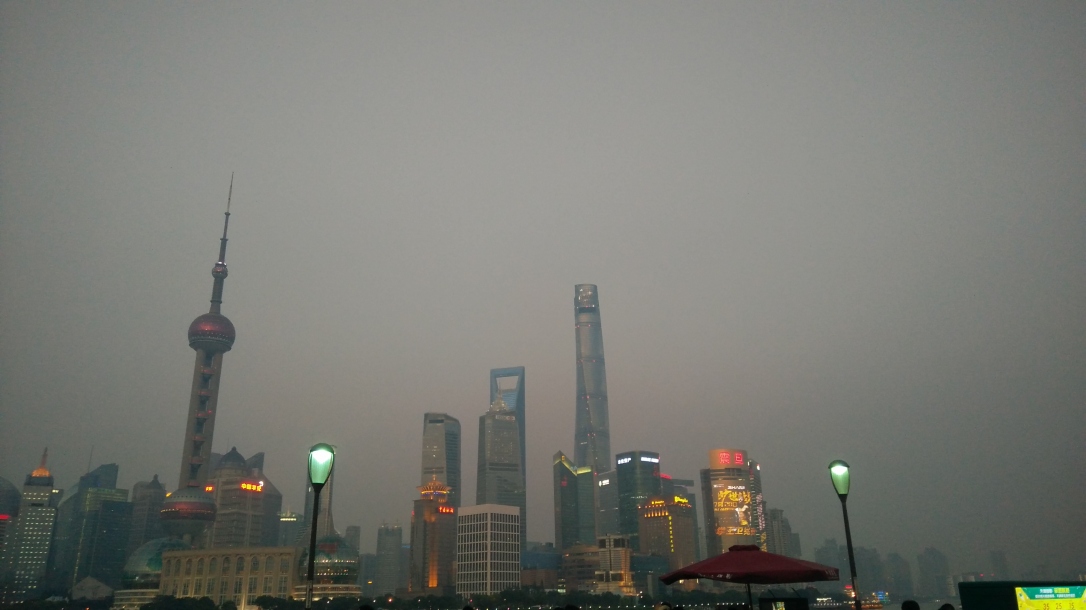 After this, we walked back towards the hotel and thought we would treat ourselves with a drink for the room and found a 2.5l bottle of Sprite for just £0.70!

Now we’re trying to book for future places and just relaxing. We plan to wake up on time for breakfast tomorrow, so we will see how that goes!

🇨🇳🇨🇳🇨🇳你好!🇨🇳🇨🇳🇨🇳
After our flight to Istanbul, we had a flight to Shanghai! This was about a 10 hour flight and after we were done with the first flight, we were unsure how ‘nice’ the plane would be.

We were pleasantly surprised as we got onto the plane and it was lovely! A decent amount of leg room and also a large screen each with a plethora of films, music choices & TV Shows! We had 2 meals. We had a pasta dish with veg, a bread roll and other things. On both flights Curtis had a free whisky and Kim had wine & Coca Cola!

Our second meal was at breakfast near when we landed, which local time was actually around 14:00!

It wasn’t the best, to be honest, but the egg was egg flavour…

We got off the plane and headed to the 144 hour transit visa area and it was pretty simple. We got our visa and were on our way into China!

We were very hungry, so once we grabbed our bags we headed right to the hotel. We had to get on a high speed train (300 Kph) followed by a VERY FULL metro ride to People’s Square. It is incredibly hot and humid here. It is currently around 23:00 and it is 33°C, with a lot of humidity.

So far, Shanghai looks awesome! Once we got to our hotel we had a shower and went out for food. We found a noodle place and ate some incredible braised beef with noodles and spring rolls, all for just £8!! Our drinks ( a Sprite and Cola-Cola) were just £0.30 each!

Photos will not be able to be uploaded to anywhere until we leave here, which is the 25th.