We actually had sun today! The weather has been great all day, so we took advantage of that!

We went to the beach and there were a lot of people, surfing and swimming. Kim really wanted to do some surfing, so she rented a surf board and off she went. She had a great hour surfing, with some pretty crazy waves! She was certainly tired after it and had a lot of sand everywhere! 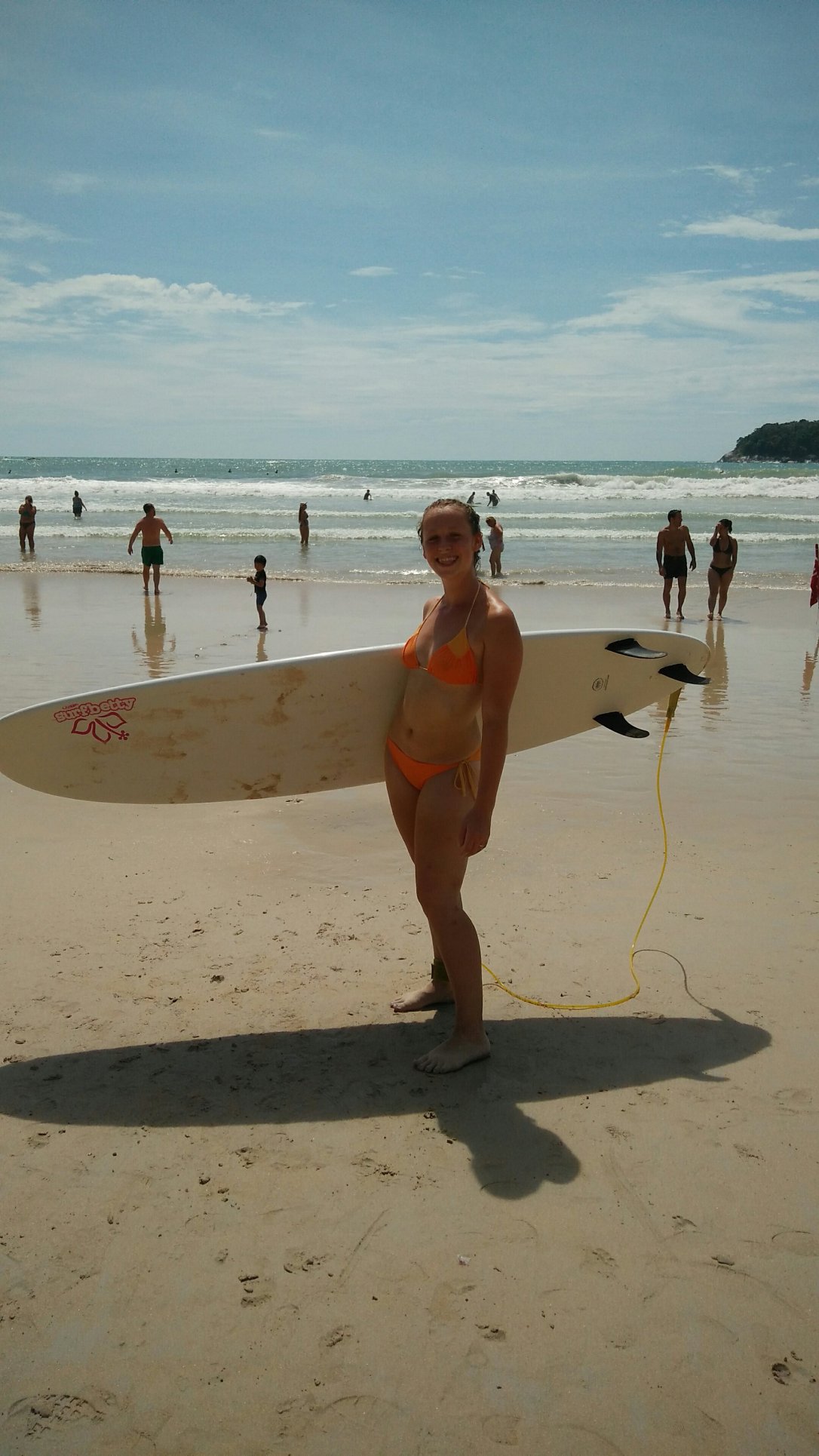 We walked back up the beach and got back to change. We then went down to the pool as the weather was still nice and did a bit of swimming! 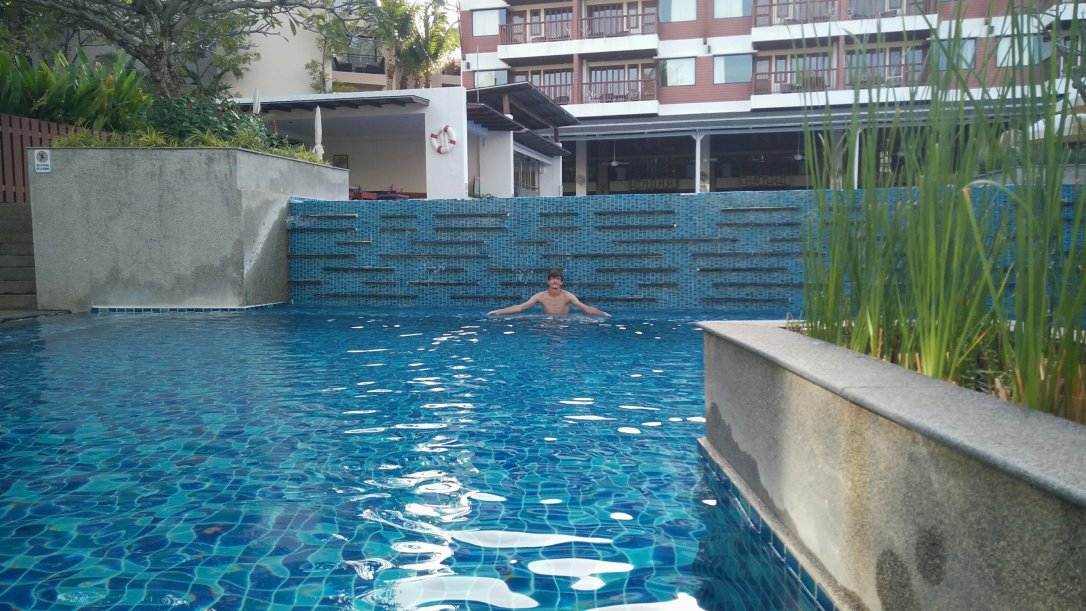 We then went for some dinner as swimming makes us hungry!

We went to a place just opposite our hotel which did 3 for 2 beers, so 3 it was! Kim had a yellow curry and Curtis had fried rice with pork. Both were pretty good and cheap!

After dinner, we went and played some dinosaur mini golf! We had a huge amount of fun doing this, and, although it pains Curtis to say it, Kim won…

There was a volcano that spewed fire, too! 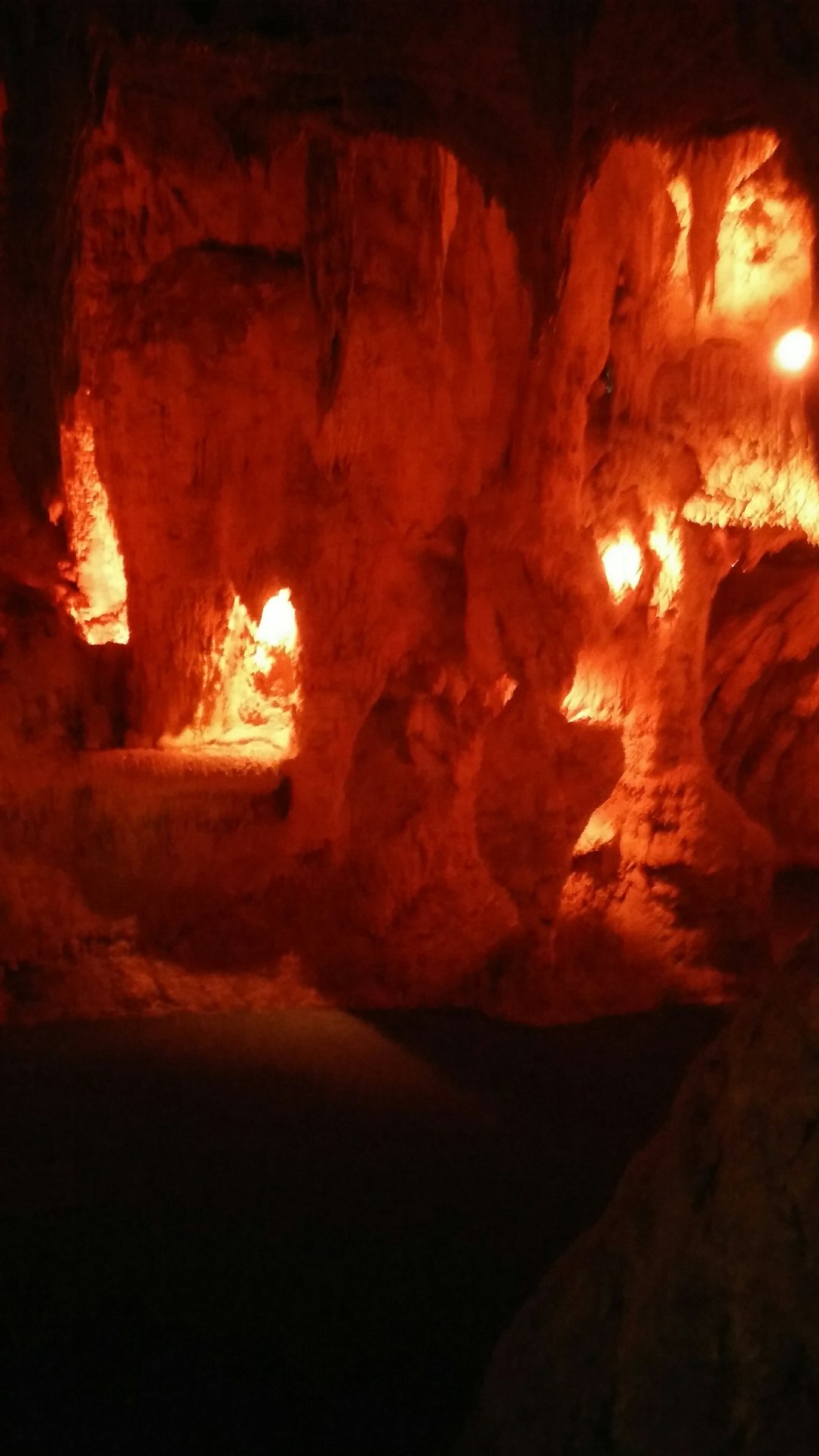 After this we went on the hunt for free SIM cards so we could book a GRAB (similar to UBER) for tomorrow, but to no avail! A taxi it is!

Kim got an ice cream and now we must pack! We leave this awesome resort tomorrow, but we move onto just as awesome things!

Right, now that is out of the way…

We woke up naturally a bit earlier today and it was actually pretty nice to get up earlier and see the amazing view outside. It wasn’t raining this morning so we got to see the view without rain, which was pleasant!

We went for breakfast and had quite a lot! Curtis had egg, toast, beans, sausage & ham and Kim had pancakes. We also had fruit & some pastries. A nice large breakfast!

We relaxed for a bit and waited for the rain (which started again) to go away. Once that subsided, we went to a different beach which was a short walk but the opposite way from yesterday.

This beach was much nicer and a lot of people were there and swimming, despite the weather. There were some large waves and some surfers were taking advantage of this! We just walked up and down the beach chatting and laughing, mostly at people because we’re lovely!

On the way back from the beach, we stopped for some cocktails! We saw a place selling some cheap cocktails so took advantage. Kim had something we think was called a ‘Green Hawaian’ and Curtis had a Margarita. Both were tasty and we just people watched as we drank.

We walked back to the hotel and got ready for dinner. We found a place that was close and had a lot of good reviews, so we went there.

The food wasn’t bad, it just wasn’t great. It was a little more expensive compared to what we normally pay and it wasn’t all that good, though, it wasn’t bad! Curtis had fried beef in oyster sauce and Kim had chicken in ginger sauce. Both seemed to be lacking flavour, though we had a great little evening meal out.

On the way back, Kim got a can of ginger ale for Curtis to have with some rum because we think it will be a good combination and Kim got a rolled ice cream (KitKat) flavour!

We have a hill going up to our resort, but as we started to walk up it a staff member on a golf cart offered a lift. This felt like a rollercoaster and was quite terrifying, but way quicker!

We now are going to speak with our families for Curtis’ birthday and then we will just be having a relaxing evening with probably a few drinks.

We woke at 10:00 to have some breakfast. The breakfast is pretty good here. It’s a buffet but there is sausage (chicken, for some reason), ham, egg, toast and of course, coffee! 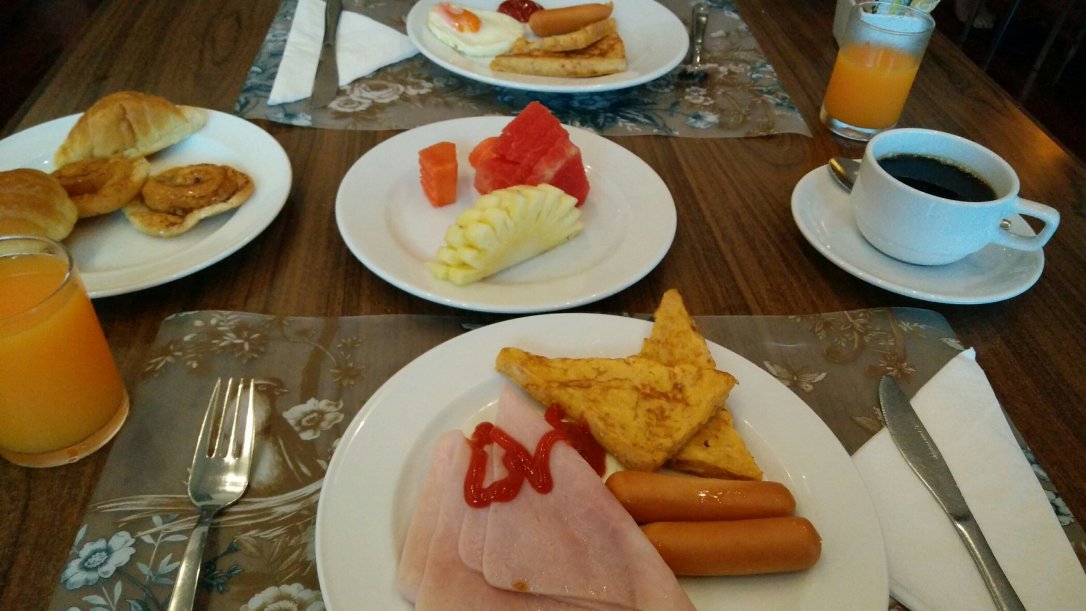 It was raining quite a lot this morning, so we were unsure what the day would have in store for us.

We chilled out for a bit before the rain cleared and we decided to head to the beach! We actually have a nice view when the rain clears a little!

On the way to the beach, we popped into the pool to have a look and see how it is. Kim took the opportunity to have a little wade. 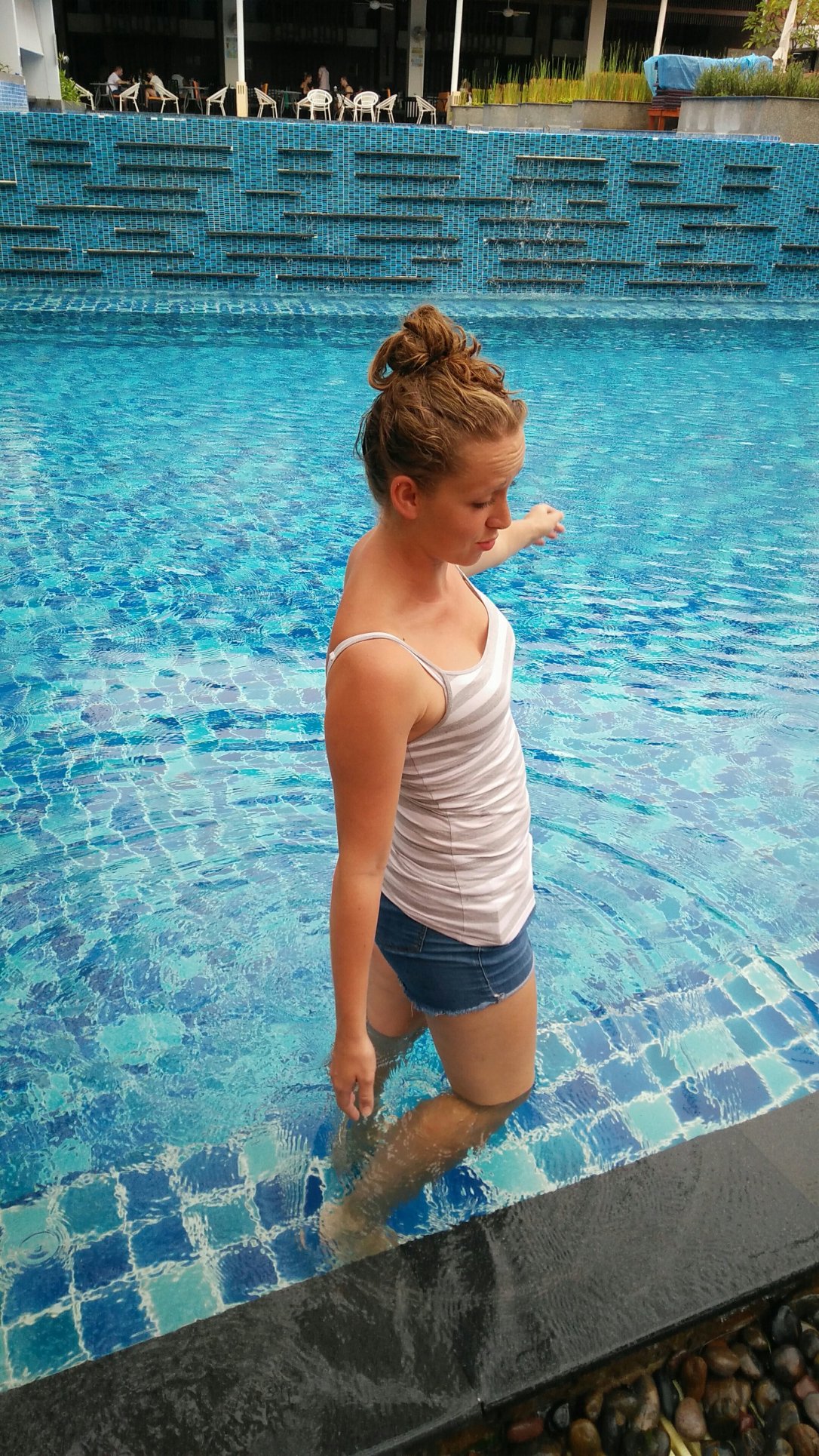 We took the 10 minute stroll to the beach which actually had quite a lot of people on it. There was huge waves which added a lot of entertainment. We both got a little wet due to the unpredictable waves, which was hilarious! We spent a good amount of time just walking down the beach and getting a bit drenched! 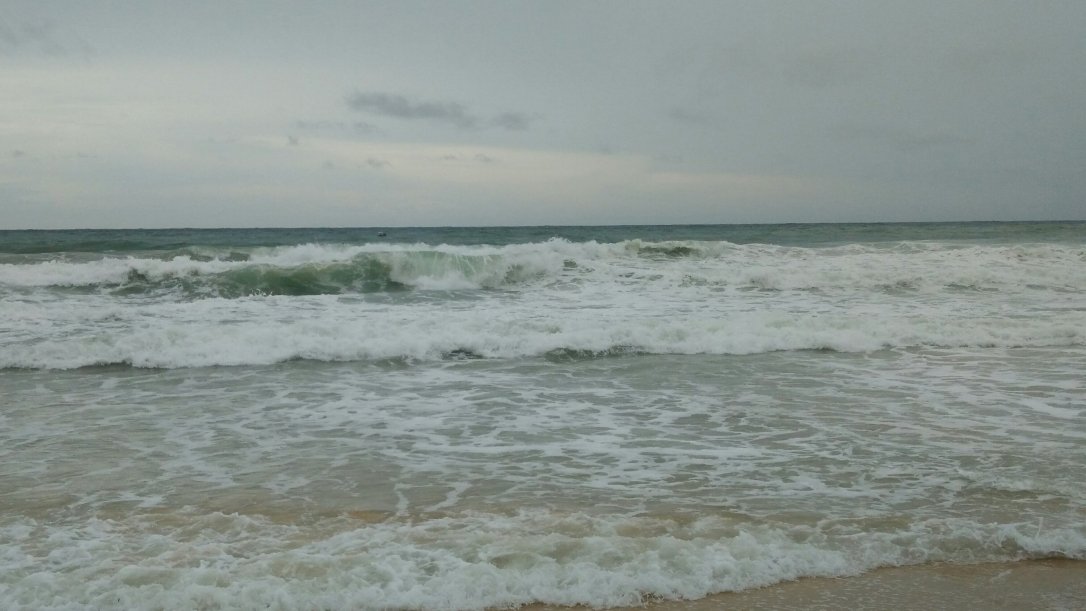 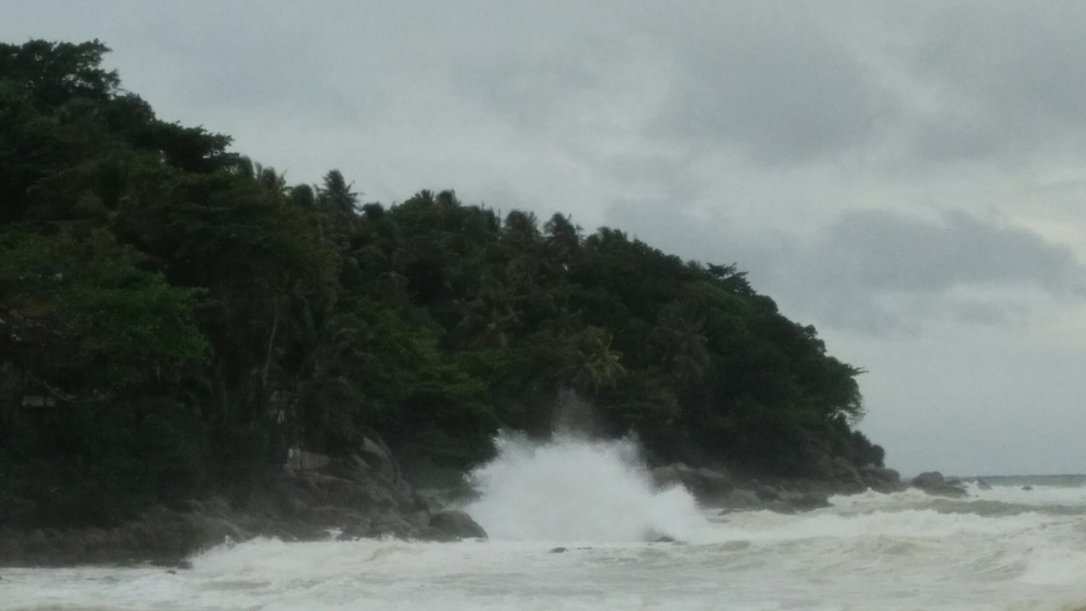 The weather isn’t meant to be great for the next couple of weeks, so we need to replan a little, but all is well!

We went to the shop on the way back and picked up a cheap bottle of rum because it was cheap…Why not?

We had to wash all of the sand off when we got back, then we went out for dinner! We went to a place that had good reviews, but it wasn’t excellent. Curtis ordered a ‘Rad Na’ which turned out to be a pepper covered bowl of dishwater and Kim had a very spicy but not too tasty and very dry yellow curry. 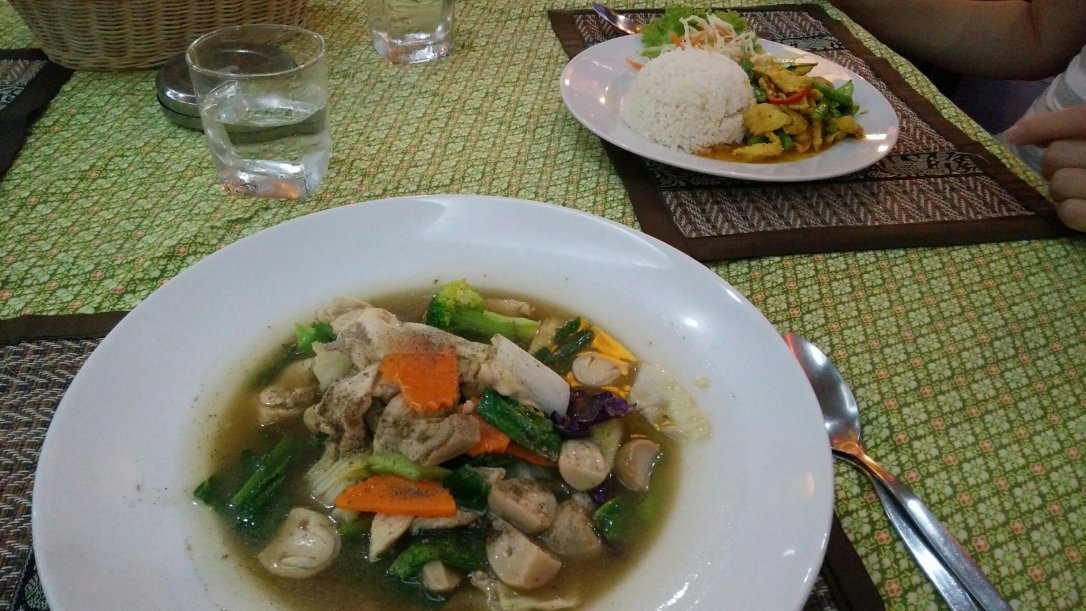 On the way back, we heard a loud noise again, which is apparently frogs! We had to ask. They make a very loud noise after rain and we heard it last night and it was stupidly loud. At least we know what it is now!

Tomorrow is Curtis’ birthday, but we aren’t sure what the plan is yet. Other than breakfast, of course!

We had a taxi booked for 11:30, so we had a bit of time. We needed to shower and have breakfast as well as pack away the last few things.

We got all we needed to pack packed and then got in the taxi. The taxi got us there pretty fast so we had a bit of time to kill, but we were able to check our bags whenever we wanted so we did that as soon as we could!

We went upstairs in the airport to get some food as we were unsure what was through in the departure area, especially as it was domestic and remembering our past experiences it made way more sense to just get something there and then. We got a subway which was actually the same price as it is on the street which is odd!

We went through security which was very easy and no effort at all.

We then went to the departure area and relaxed there for a bit and played some UNO & Monopoly Deal.

We went to board, queued up and all, but it turned out to be the wrong flight! Ours was the next and in just 20 minutes so not a big deal.

We finally got on a plane and it was about 1 hour of flight time before we landed in Phuket.

We are still in Thailand, but now on a nice island. We are in the bottom part near a lot of beaches, which is nice!

We got a pickup to get to our hotel and this took a long time from the airport due to rush hour traffic.

We finally got to the hotel and it is beautiful! We had to get a golf cart to get to the other part of the hotel where our room was. We have been given what seems to be a double upgrade which is amazing! We are here for a few days only for Curtis’ birthday, so we got somewhere a little nicer! We have a sofa in our room and a huge balcony with an incredible view!

We looked up some places for food and there was a very well rated Thai cheap place just 3 minutes walk from the hotel so to there we went! We got free fruit & garlic bread, too! Kim had a panang curry and Curtis had phad See-Ew. Both were tasty and the free stuff was welcome! 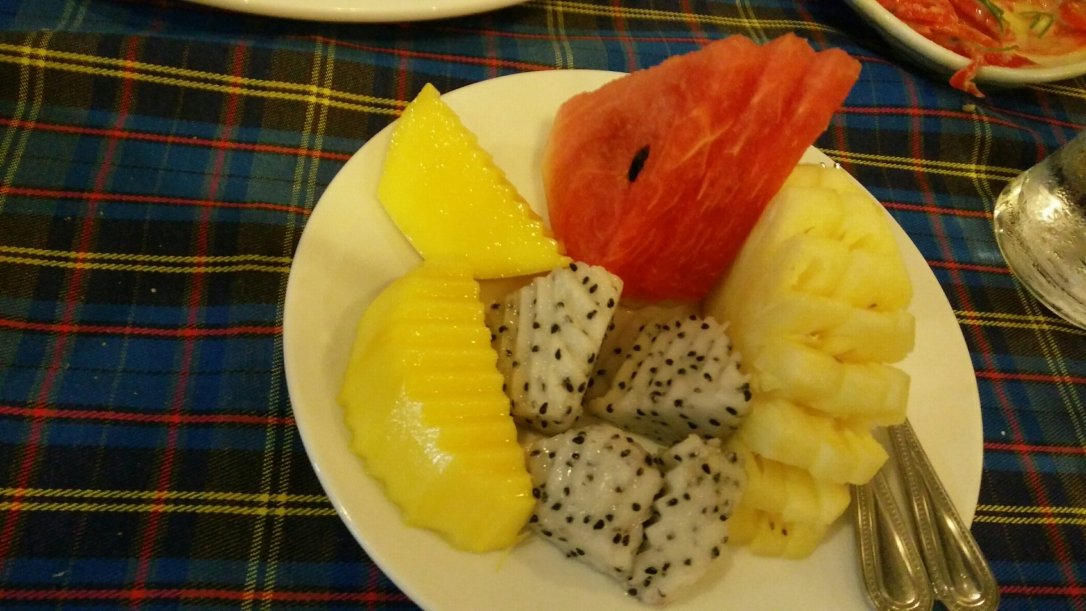 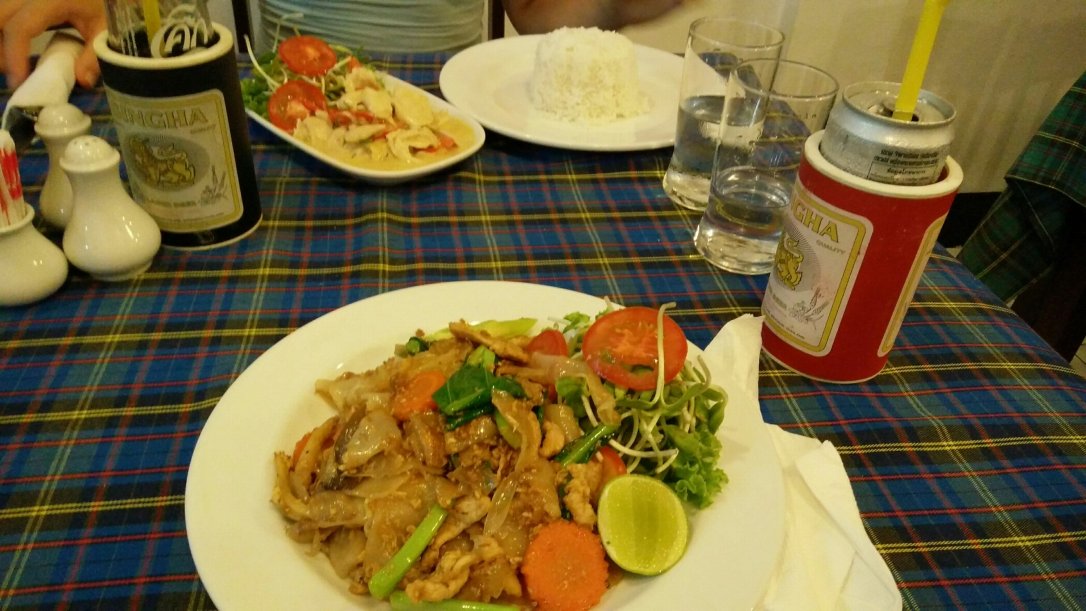 Now we are back in our room chilling and waiting for the morning where we can sit on the balcony and look at our incredible view in the day time! There is meant to be a storm over the next few days apparently, but we have a couple of swimming pools so no problem there..