We were checking out today, at 12:00, so we made sure we packed this morning (we didn’t bother last night!) And we checked out at pretty much exactly 12:00.

We left our bags and rented a scooter again to see what we can do until 20:00!

We went to Elephant cave which was quite close to us. This is an old Hindu temple (and a Buddhist temple) and the Hindu temple also has a part in a cave (all be it a tiny one!).

This was fairly interesting though it wasn’t something we could be at all day! When we went to the Buddhist temple, a man splashed our heads with holy water, which was interesting!
We both had to wear sarongs and Curtis got to wear a fetching pink one!
We left the elephant cave and still had some time to kill before our dinner reservation so we went to Ubud centre. We found where our dinner place was and then went for a walk. We came across an ice cream shop which also sold coffee, so a sit down and a cappuccino it was!
We left here and went for a walk around. We found a market which we went for a walk around in which was a good way to pass time. We got bored of the market so we took the bike and went to a cat cafe, which turned out to be far too expensive so we took the bike back to where we had booked for dinner and just walked around Ubud again. We came across another temple with a pond with lotus flowers in. It was a very beautiful place, though there were a lot of tourists! 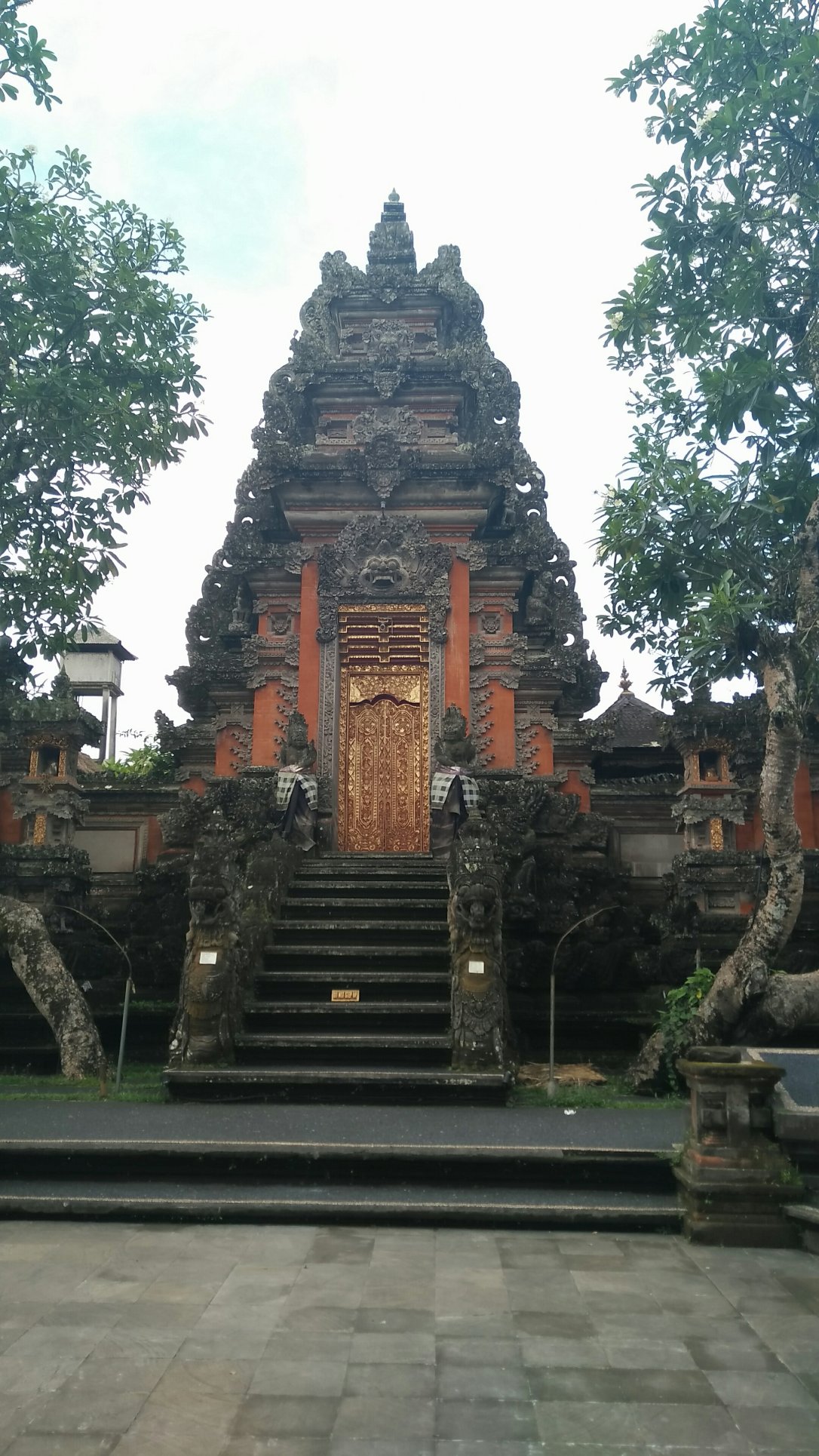 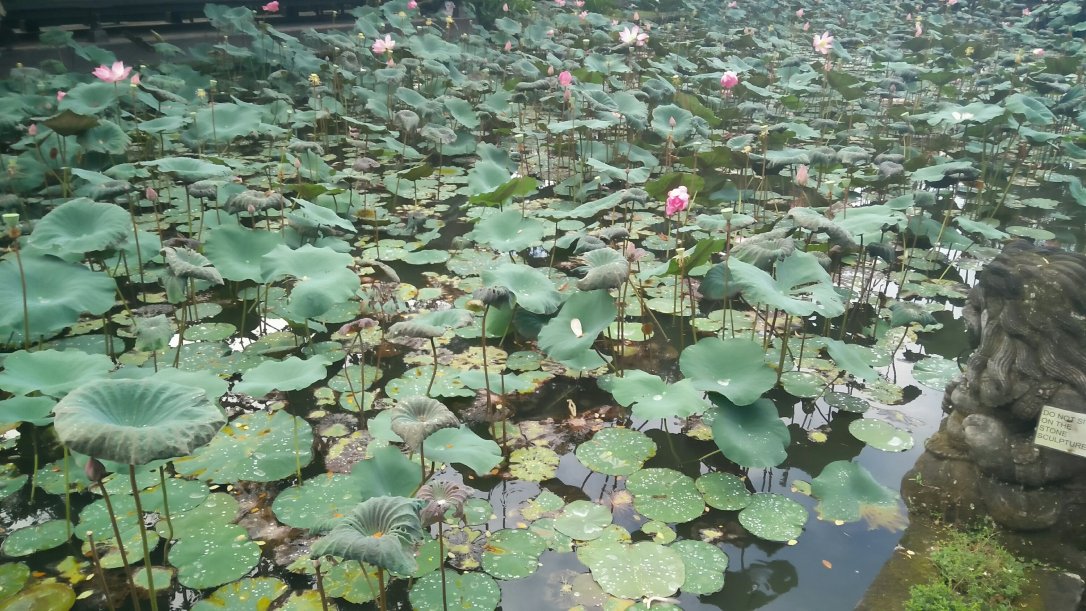 We went for our dinner and it was pretty tasty! Curtis had chicken with green vegetables and Kim has orange & mint chicken. We then had a dessert too! Kim had a chocolate tart and Curtis had a lemon pie. Both were far too filling but Kim was able to take hers with her.
For some reason, on our way back, we had to go pretty slow due to a parade going on, which we aren’t sure what it was about!
We got back and it was nearly dark, but we went to grab a drink quick. We got back and handed over the scooter, got changed and now we have an hour to wait for our taxi to the airport!

We had breakfast and rented a bike again and went to the beach!

This beach took us about 45 minutes to an hour to get to on the scooter, but it was nice and simple!

We got to the beach and it was a black sanded beach! Curtis had never seen it before and it was fascinating to him. This beach was near enough empty, so we just had a stroll around it for a while.

We are pretty sure we burned our feet due to the sand being incredibly hot!

After we finished at the beach Curtis decided he wanted to try and ride the Scooter and it was not hugely successful! Curtis decided it wasn’t a great idea, so Kim rode again!

We left the beach and went to try and find a waterfall as we had seen a few on the way.

After many, many wrong turns and stops, we found a sign for a waterfall, though technically a different one then we planned to go to!

We went into the waterfall and it was beautiful! The water was a little dirty but it was an incredible scene. There was a much larger waterfall then we expected, followed by a nice river at the bottom which we could wonder around. We got some great photos! 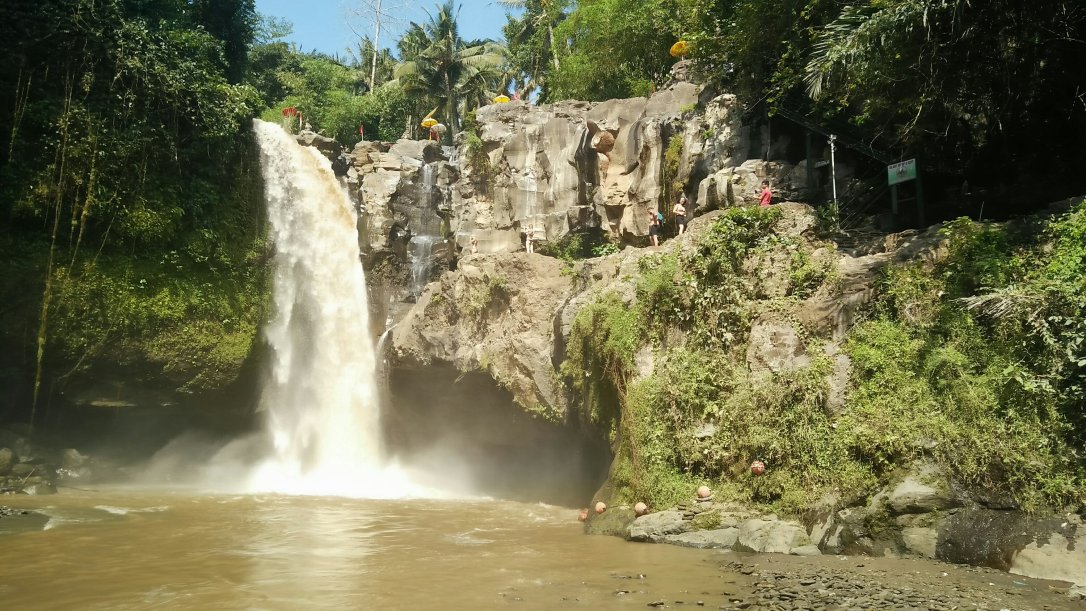 We got back to our accommodation and relaxed for a little bit by and in the pool.

Once we got hungry, we went to find some food. We didn’t want to go to the same place, so we found a place about 10-15 minutes ride away and went there. The food was delicious and a great price! Kim had fried chicken with coconut and curry sauce and Curtis had marinated chicken with Balinese spices. It was a great dinner!

We left here and popped to a supermarket on the way back to get some dessert and then got back to the villa, bought a beer and booked our taxi for tomorrow night!

We are leaving at 20:00 tomorrow to get to the airport as we have a flight early morning! We are excited for our next location!

We woke a little earlier, had breakfast and got ready to head out.

We rented a scooter for a crazy cheap price (about just over £2!) And off we went. Kim took the reigns with this one as she has the experience. It was a pretty easy journey and we were able to arrive at the optimum time without being rained on!

We had to go through a tiny little street which went through the forest and to another carpark where we parked up and entered the forest.

There were an abundance of monkeys! There are over 700 there which is obvious as they are everywhere! 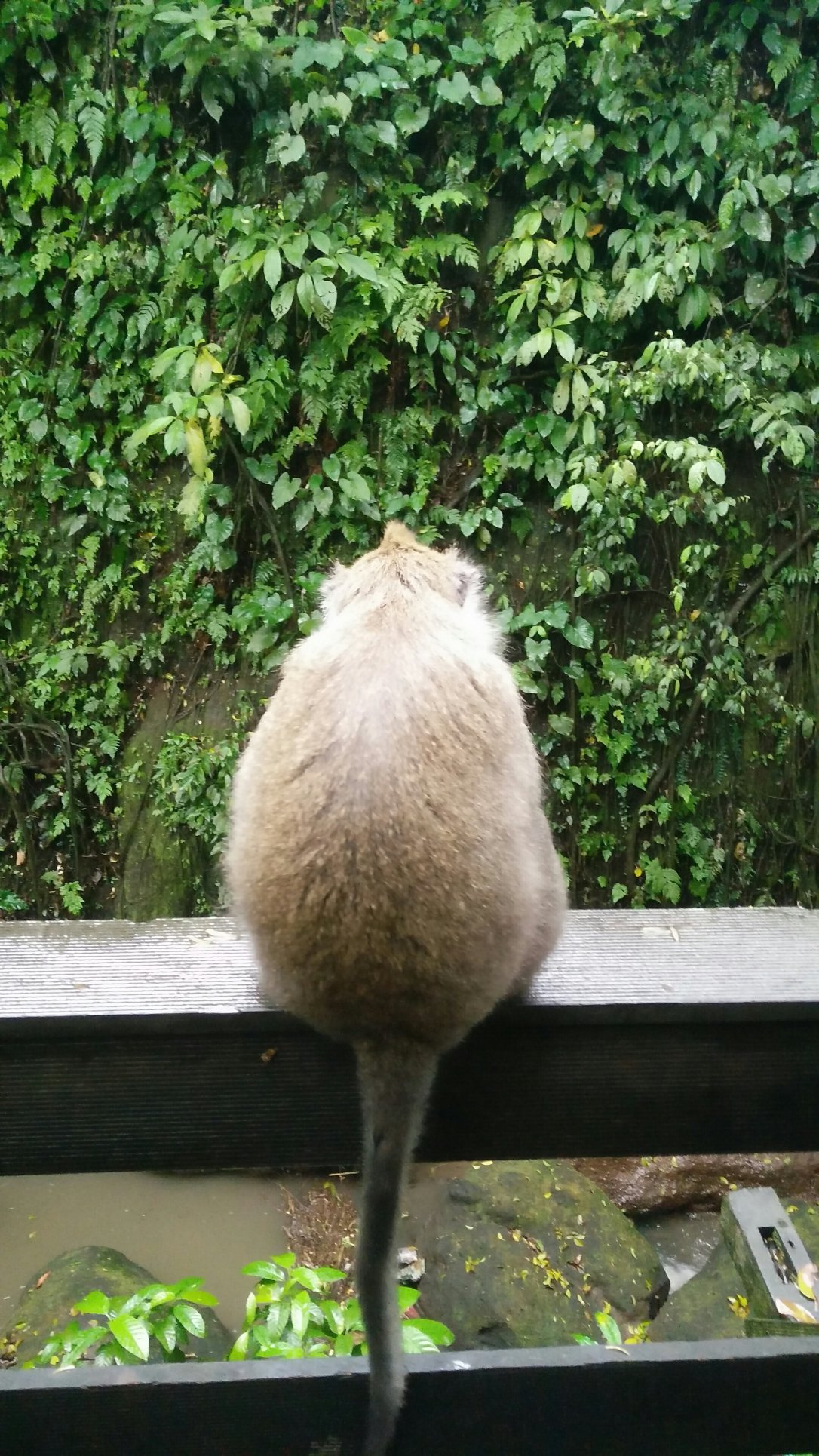 The scenery itself was beautiful. There were rivers and large trees, vines for the monkeys to swing on and old and still used temples.

A monkey seemed facinated with Kim and proceeded to try and feed from her, which was an interesting experience!

Curtis was jumped on by monkey and was worried that it would attack his glasses, but it just sat there on his shoulder.

We spent a while here, enjoying the scenery and monkeys and then left.

We went to a supermarket just down the road to pick up supplies. We got a drink and an ice cream before we left to come back home.

We were rained on a little on the way back, but not too much that it caused any problems.

We got back and relaxed a little as we were apparently very tired! We then had to decide what to do for dinner and seen as there aren’t many places close by and it was raining profusely, we decided upon our normal location. We started with bruschetta to share and then Kim had a pizza and Curtis had sweet and sour chicken with rice. Kim then finished off with a banana split. 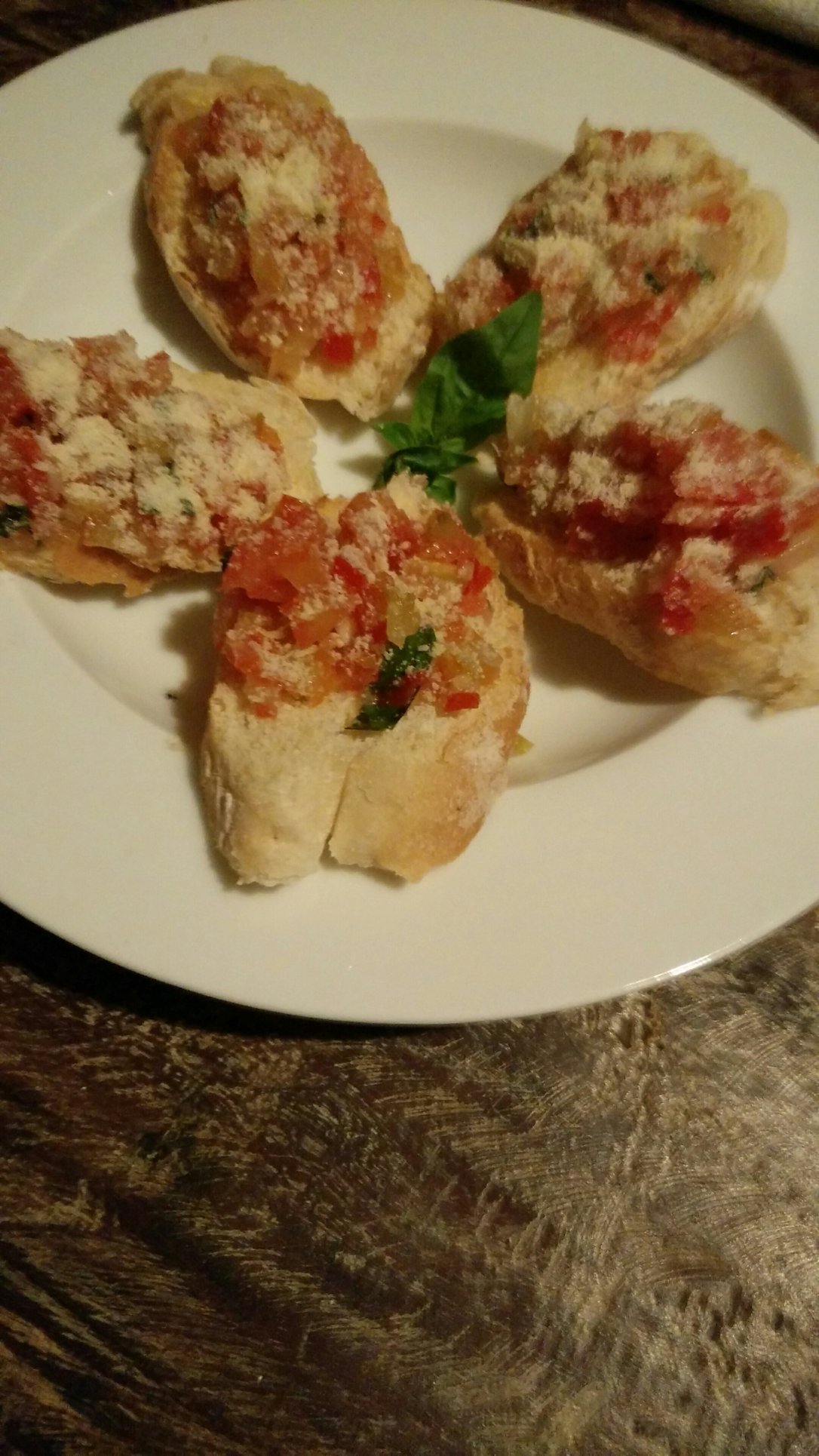 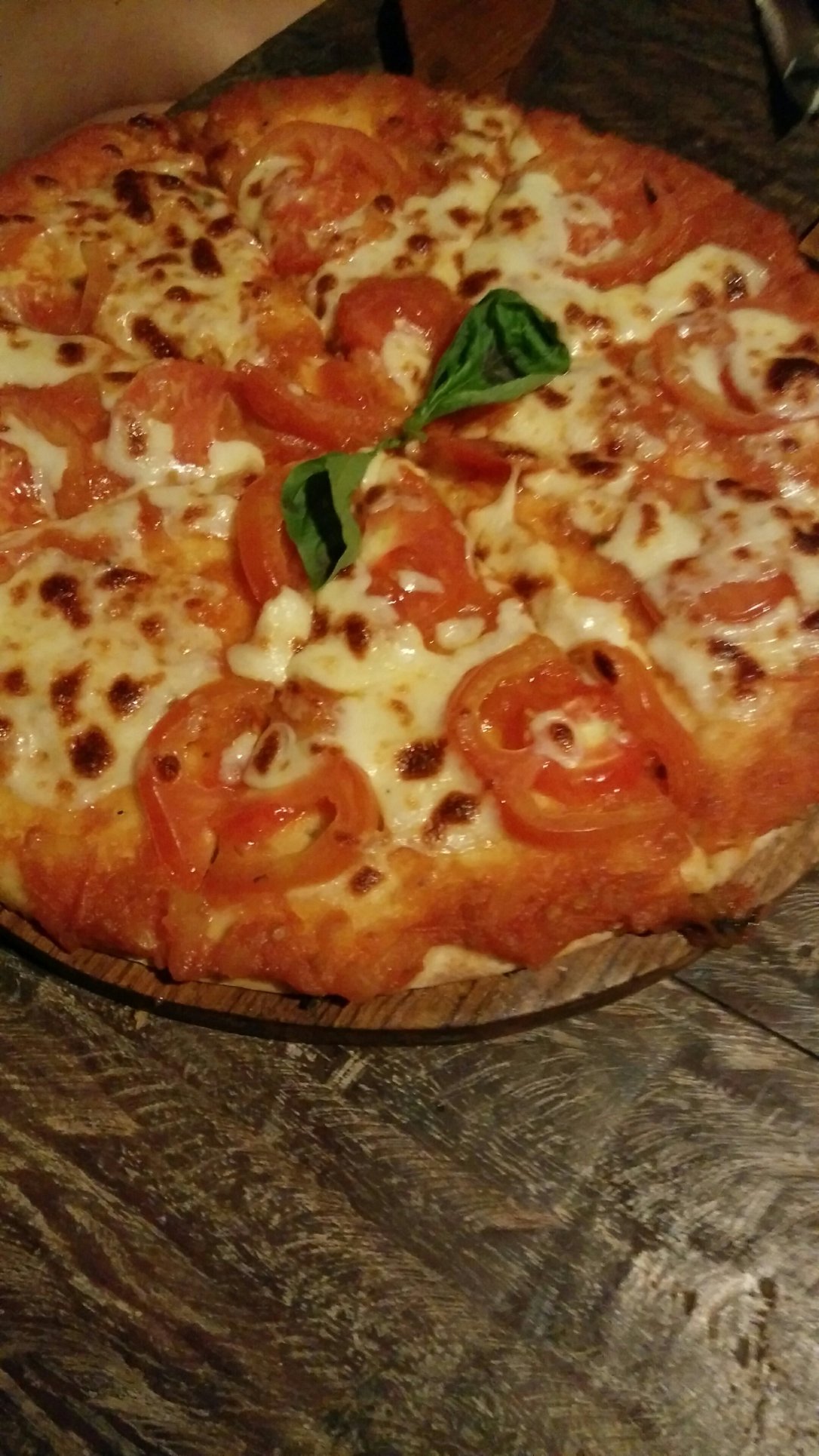 It was a bit wet when we finished dinner. There was definitely a thunderstorm happening!

We got back to our room before all power cut out, we assume it was due to the rain.

We had a nice long sleep and woke up at 10:30 for breakfast. Breakfast is just a few steps, just past the pool, from our room. We each got a plate of fruit, Kim had a pancake and Curtis had egg with toast. It was presented very nicely and was tasty! Can’t complain for our view at breakfast either! 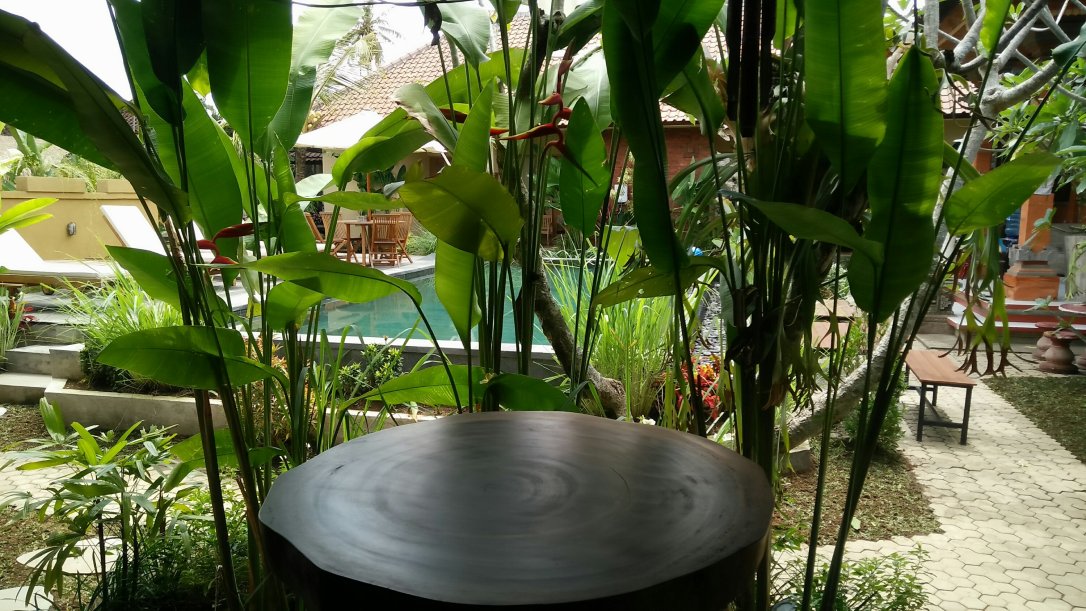 We did absolutely nothing in the morning, just did some research and watched some TV. It was the plan to just relax after the hustle and bustle of the cities we had visited and being non stop. Kim went for a little wade in the pool and we sat around there for a while, enjoying the surprisingly sunny day. 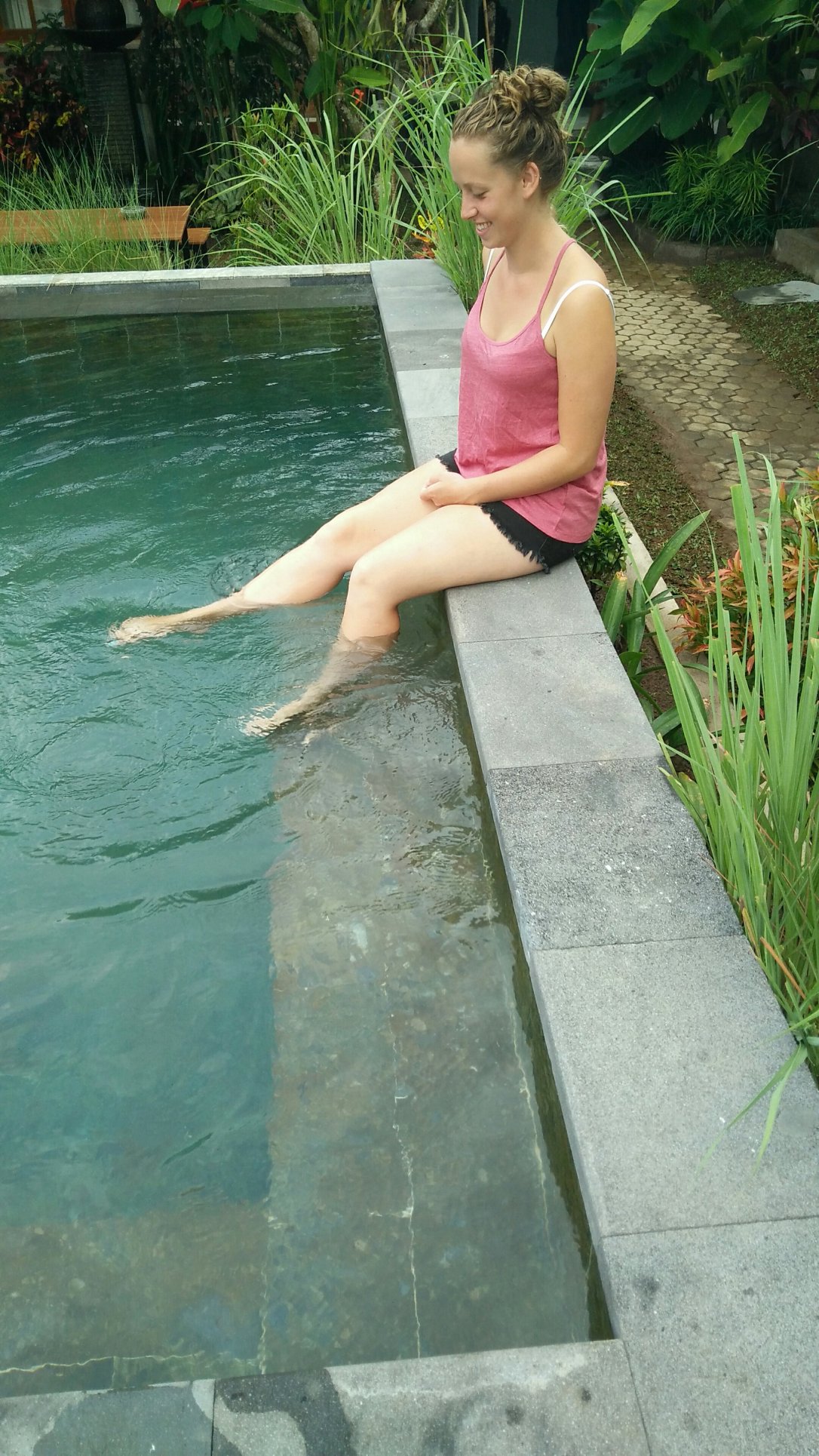 For dinner, we went to the closes and seemingly only restaurant nearby, the same as we went to yesterday.

We ordered spring rolls to start and then Kim had Crispy duck with rice and Curtis had what was basically a chicken and vegetable soup but it was delicious!

After dinner, we got a beer each (for just £1.61 for a large bottle!) And chilled out on the porch with a nice relaxed view again! 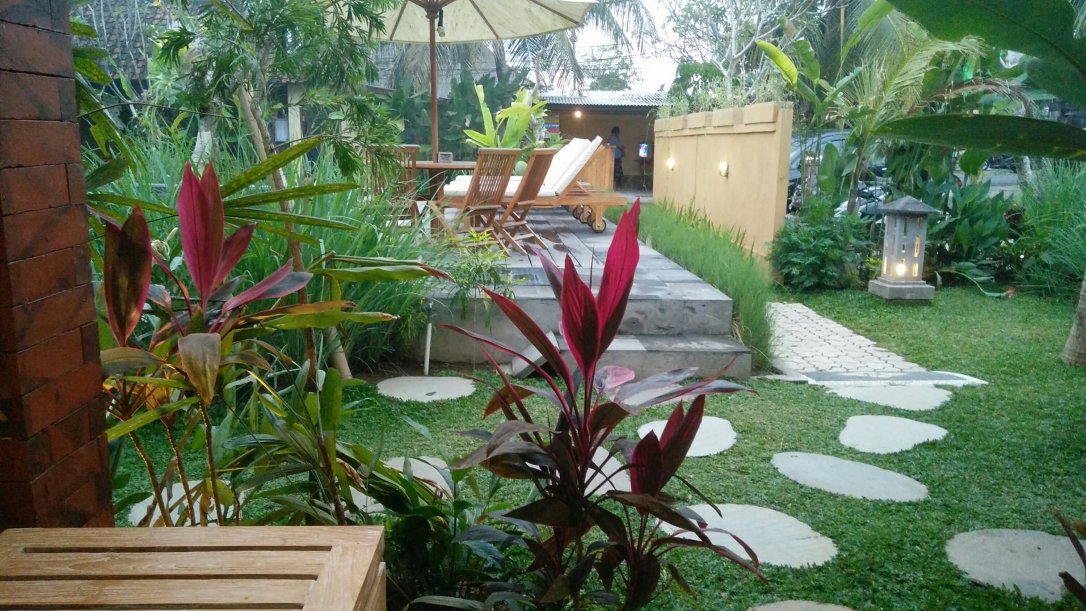 Everyone around us here and on the street are very welcoming and up for a chat or a ‘hello’ even though they don’t really speak English. It’s a really nice, relaxed atmosphere.

We think we will be doing something exciting tomorrow!

We luckily didn’t have to wake up early for a flight today, unlike the last few flights!

We checked out at 12:00 and walked to the tube station to catch our tube and then a second to arrive at the airport. We arrived at Terminal 3 and had to get the shuttle train to terminal 1, where we were flying from.

We arrived all well and good and proceeded to our check in area. Using the machine, Kim was able to check-in fine, but it wouldn’t work for Curtis so he had to get it done manually. We dropped our bags and went through the first sent of passport and boarding pass checks, followed by another passport check and fingerprint check!

We got to the other side and found out that the main security check (bags etc) was at each individual gate and not in one location. This means that we were not able to buy a drink and take it through!

We found Subway and ate that near our gate, before we got a bit bored and went for a walk. As we were walking, we relised we really wanted a beer, but it was £11 per beer so no thank you! Shortly after this, we see a booth from ‘Stella Artois’ and we jokingly say ‘would be great if we got free beer’! Low and behold, we did! Only 5 people at a time can and we got the just 5 minutes before! We hit the button and the side of the booth opened and there was a bar, a barlady & beer! We both got a free half pint and met some great people there. We met an American man, one man traveling to Hong Kong and another from Malaysia. We all stood and had some drinks whilst chatting until we realised we needed to go to our flight, so off we went!

We got to the gate only to find out it had been delayed for 15 minutes! We chilled around the area for a bit and then were let into the security and the gate area. Whilst waiting, we noticed that we were delayed again, a total delay of 30 minutes.

We boarded the plane eventually and then didn’t take off for another 45 minutes or so! By this point, we had both already fallen asleep a few times.

The flight took 2 hours or so and we eventually arrived in Bali!

We were met by our driver who was very lovely and taken to our hotel which was about 1 hour or so away. We are very secluded and have a beautiful room on the bottom floor! This is a homestay rather than a hotel, so similar to a BnB but it is very beautiful! We have a front porch right near the pool and a balcony! It’s great!

We came into our room and then were asked if we wanted some food, we obviously said yes and went down the road with the owner who took us to the local restaurant. This restaurant was beautiful and very, very cheap! For just £4.60, Kim has spaghetti Bolognese and Curtis had friend noodles with chicken and egg. Both were pretty tasty! This along with 2 drinks was that cheap price! Think we can deal with this..

Now we are very ready to get some sleep in and breakfast is until 11:00 so that means a lay in!