We got the room pretty much finished today! Due to rain we couldn’t paint it all, but it is probably 85/90% complete which is a great achievement and feels great!

We finished this then went out (after the rain stopped!) to the centre where we met some friends and went for a walk.

We got some Mexican food which was incredible AND cheap!

We walked to Darling Harbour and it was beautiful! The sun started to go down and created some amazing views! We saw a lot of former military boats including a submarine and 2 pirate style boats.

We walked the train station and got back, then we had to pack. We leave at 6am tomorrow, so we had to get everything sorted.

We had some carrot cake and a hot chocolate and then we’re off to sleep!

We started out the day again with some painting. We did a 3rd coat on the skirting boards and door frames and painted the door. We then moved onto the walls, which we did a coat on pretty quickly with a roller. We touched up the outsides with a brush and it was looking pretty good pretty fast!

Once we finished, we got showered and went onto the train to the centre where we went to the Lindt Cafe.

We took a while to decide and we chose to share a chocolate cheesecake for food and Curtis had a dark chocolate mocha and Kim had a chocolate milkshake. It was all delicious! 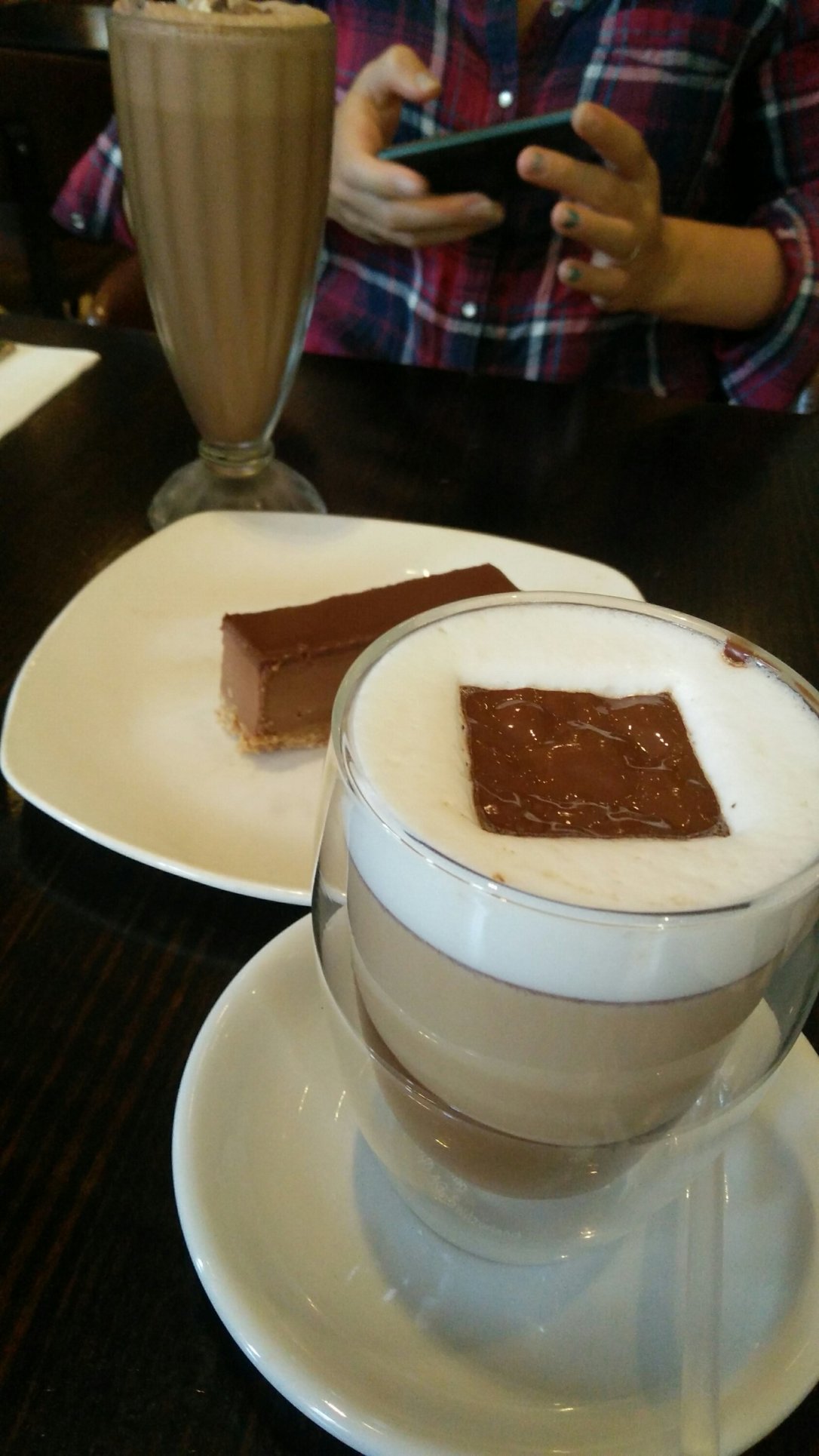 We left the Lindt Cafe and went straight to the Harbour Bridge. We walked along the bridge for a few minutes and took in the outstanding view of the opera house! We also noticed the bridge shaking with all the cars driving on it, which was unnerving! 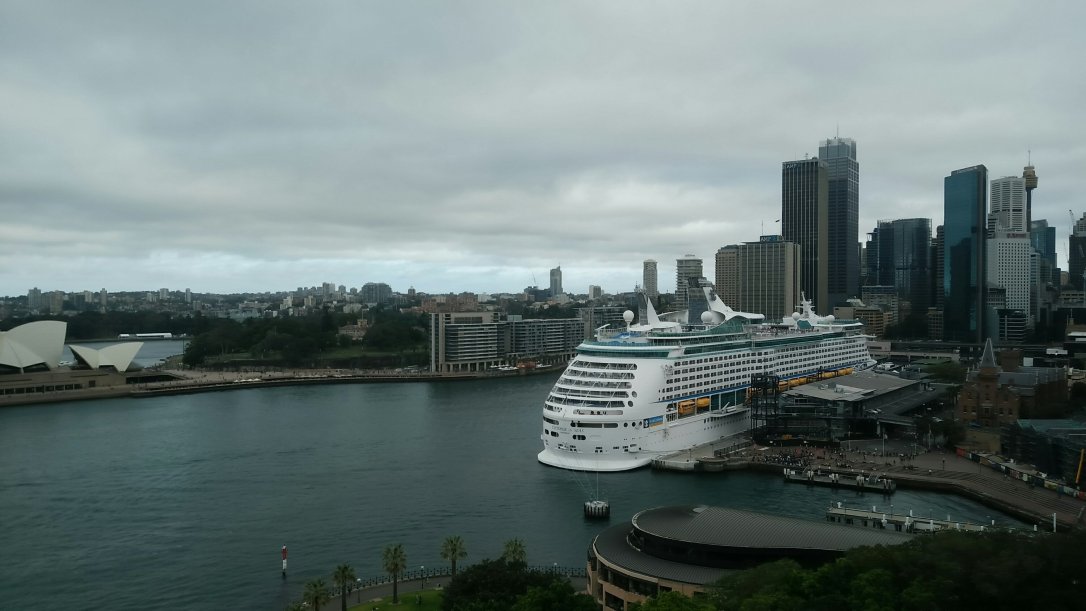 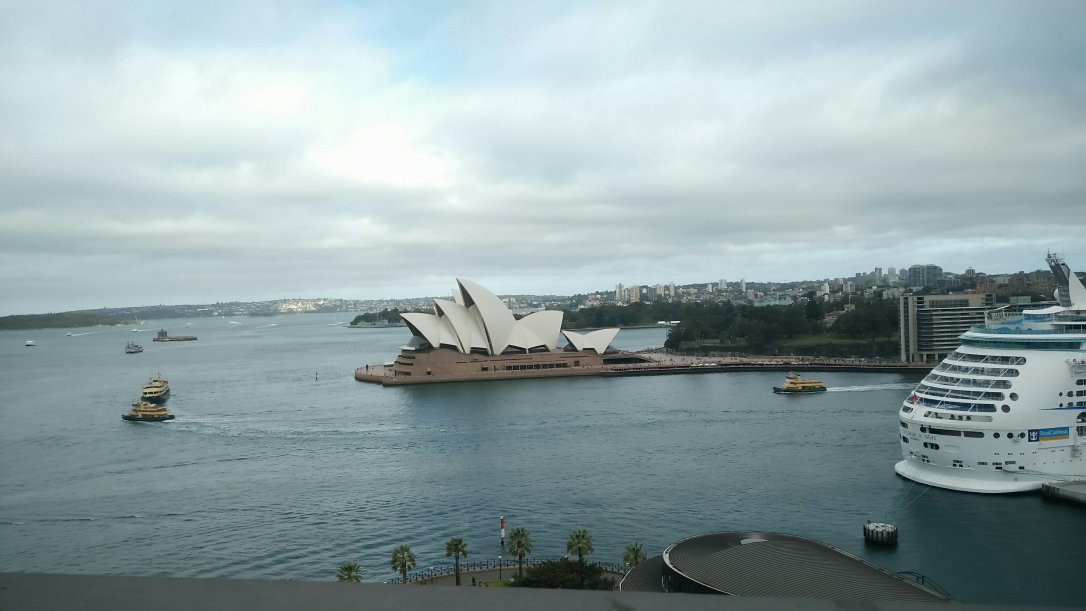 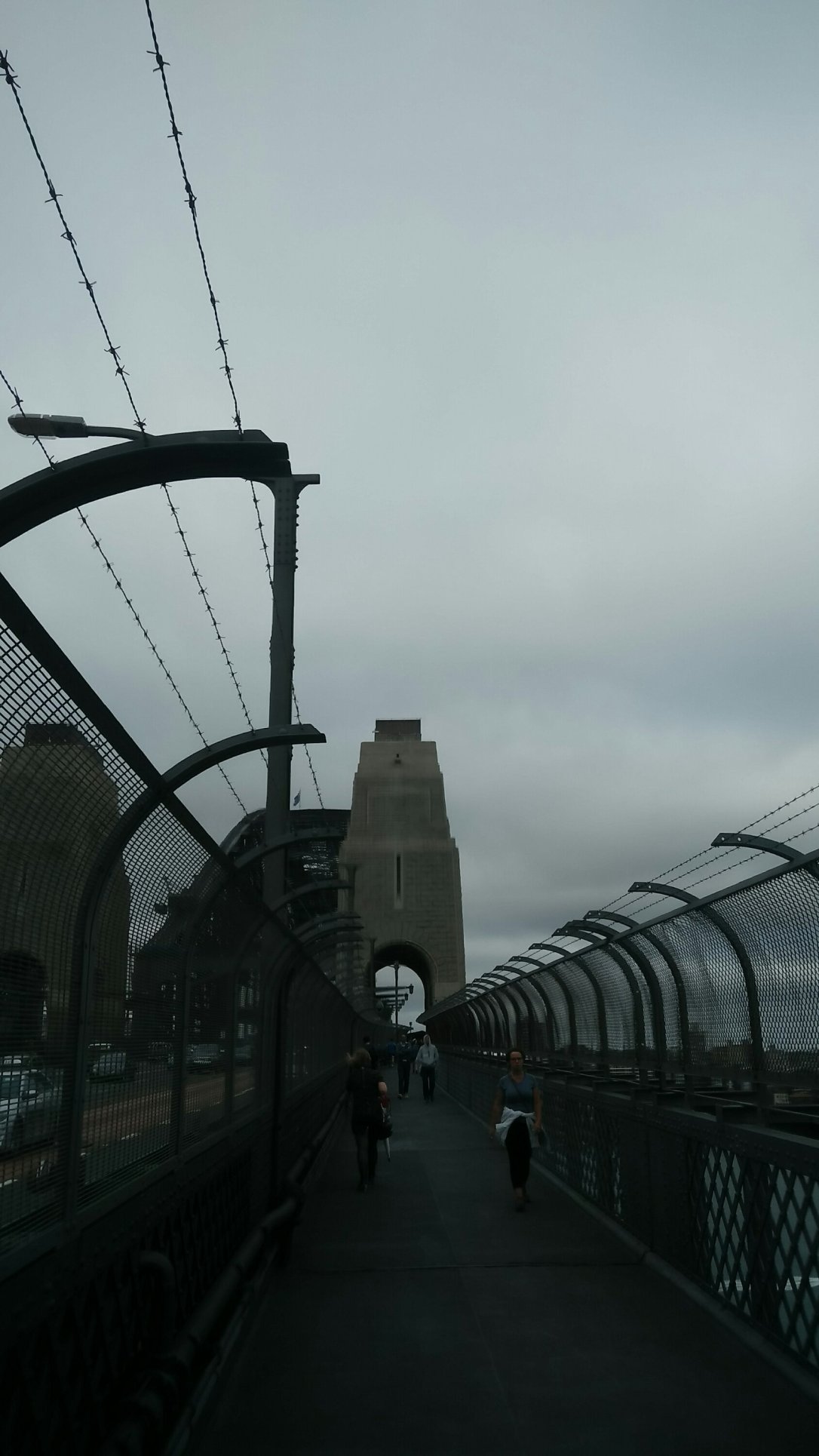 We left the bridge and took the train home. When we got back, Curtis weighed the hockey bag so we can add it as baggage for a flight and then Kim made some dinner.

For dinner, we had a chicken and vegetable pasta which was scrumptious!

We finished the evening with some TV!

Tomorrow is our final day in Sydney and we’ve had an awesome time!

We had a small lay in and then got right back to painting.

It was raining outside, so we were unable to complete the door painting, but we did do a 2nd coat on the skirting boards.

We painted for a few hours and then we got showered and Curtis had a Skype interview so had to get looking all smart.

Curtis had his interview and Kim started cooking whilst he was interviewing.

Kim made an amazing roast dinner. This was a whole chicken, roasted veggies, gravy & Yorkshire pudding. This was topped off with a homemade carrot cake.

We finished the evening with some much needed, but boring, admin.

We got the bus and then then train to Circular Quay and met our friend Hayley there.

We got on the ferry at the wharf after being stuffed into the waiting area and we were off for our 30 minute ferry ride to Manly Beach. Along the way, we passed the Opera House and the Harbour bridge! It was a beautiful morning with amazing views from the boat.

We got off the boat on the other side and stopped at the supermarket for a drink and some snacks and whilst getting directions, Curtis’ phone got poo’d on by a seagull! Pesky seagulls!

We got to Manly beach and it was absolutely packed. We found a spot quick enough and claimed it. We sat and chilled for a bit and it was very, very hot! Whilst at the beach, we sat in the sun, went in the freezing cold sea and sat some more. 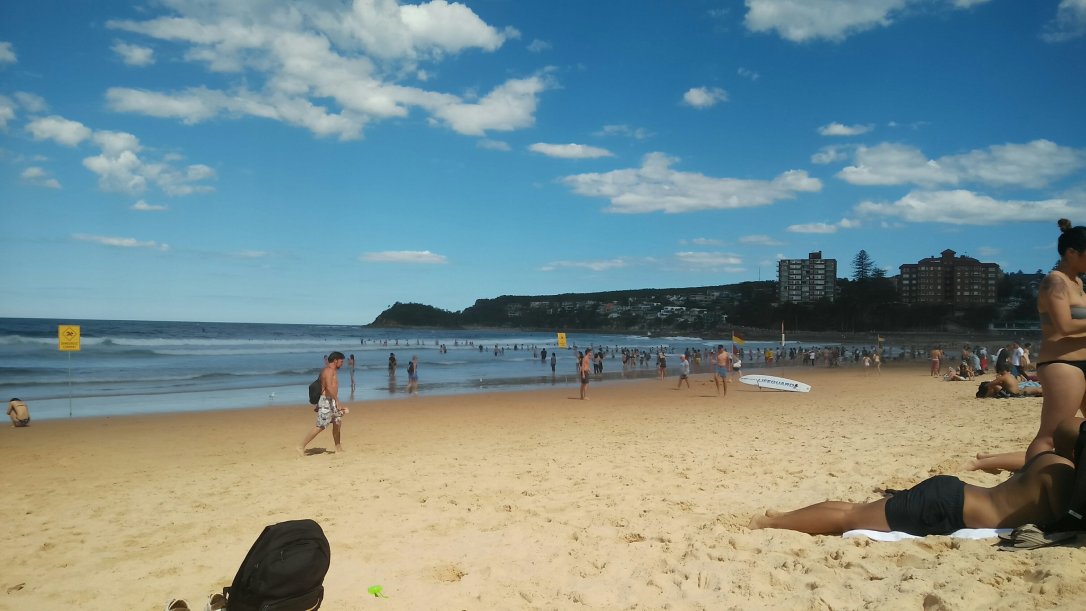 At one point, we moved down the beach so Kim could rent a surf board and surf for an hour! Kim had a great time and stood up a few times… It was much easier than in Thailand!

We were at the beach for a long time, most of the day, and then we went back onto the ferry to get back to the centre. The views on the way back were just as amazing.

We got back and took the train and bus straight home and then went right back out to get our healthy dinner from KFC.

We then sat and watched some TV before heading to bed after a very long and fun day!

We were up and out this morning as we had a friend to meet in the morning.

We didn’t have breakfast but decided we would get some in town.

We looked up the train and there were none! We then found out that some trains were not available due to track works, so we had to take replacement busses.

We got to the bus stop and luckily they were free busses, so we hopped on it to Central train station. We were sat directly behind a guy who was shouting on the phone for most of the journey, which was incredibly loud for 10:00!

We then moved from McDonald’s to the Guylian Cafe where we got some fancy coffee! Kim got a coconut hot chocolate and Curtis got a mocha it was tasty! We sat and chatted for a while about everything then we left the shop and went for a small walk. 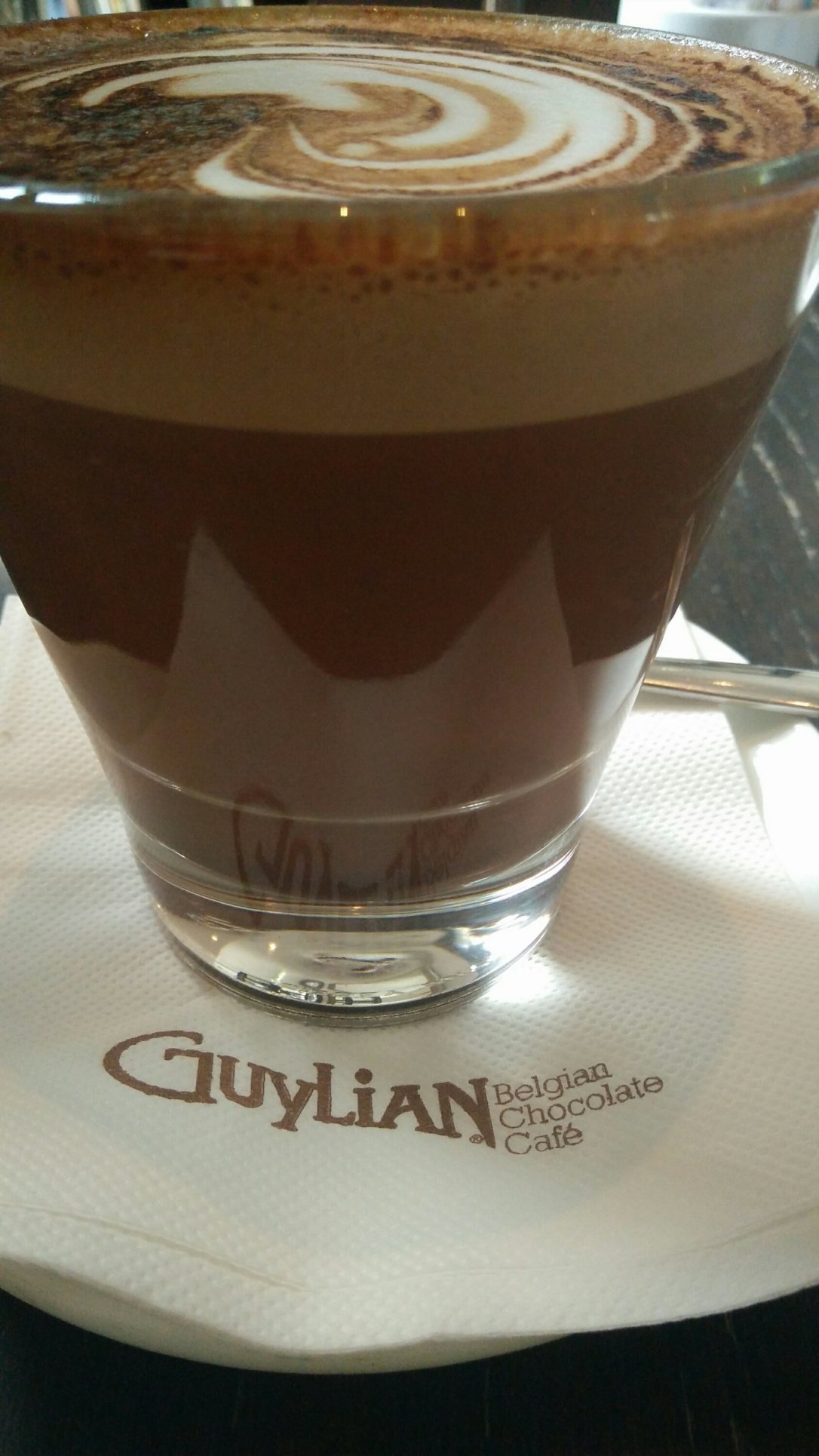 We had to part ways with Ricki and we went to get some things for Curtis. He had to get some shirts and shorts, so we went to H&M. After H&m we found somewhere for Curtis to get a haircut and then we had to get the bus back to the house which meant walking and waiting in the rain for a while!

We got back and then went to the shop. Kim then made some great food! We had sausages, mash, peas and mushroom & onion gravy.

We watched some TV then we’re off to sleep.. Another fun day tomorrow!

We woke up nice and early, had breakfast and sanded a few things that we needed to sand and then got right on with painting.

We needed to clean off the part we were painting first, so we did that and then pained the door frame.

We spent about 3.5 hours painting and it was very cathartic and quite fun to paint!

We finished with painting and Curtis watched ice hockey.

Once this was done, we watched some TV and then had to pop to the shop for some dinner items. There was a lovely view of the sky with the sunset, too!

We got back and our host had made burritos so we ate those and they were delicious!

This is a repost as the previous was deleted for this day, for some reason! This will be much shorter than normal. Sorry about the repost.

We did some work getting some things sanded and filled before we went out with some friends for dinner. Kim had ribs and Curtis had a burger. It was tasty! 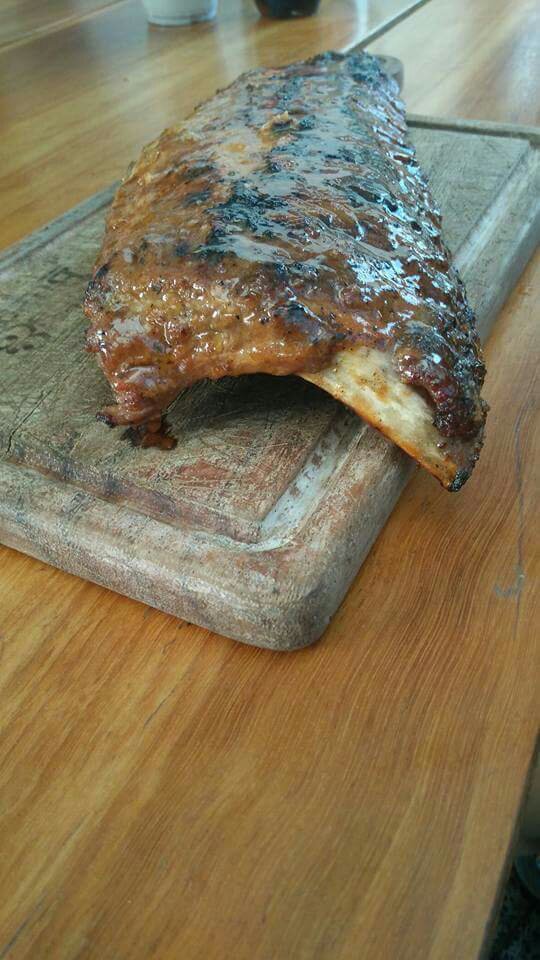 We walked to the botanical gardens and then we sat and chatted next to a bit of river which was where a big military boat was. 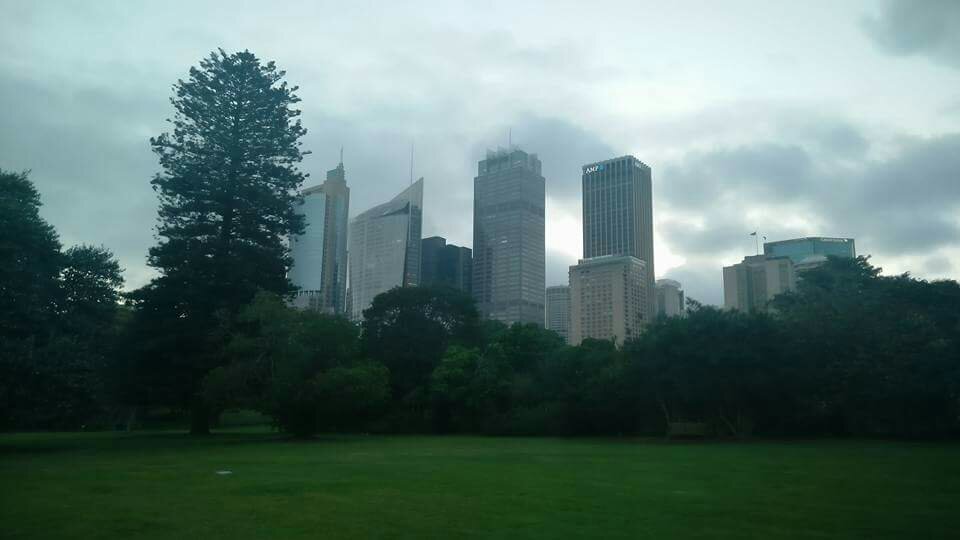 We started the day by sanding the filled holes and then we re-rilled the holes. We had to wait for 3 hours, so instead of doing that, Curtis watched ice hockey and Kim watched TV before we went out on the train to the centre to meet our friends.

We met our friends from home and went to a Thai restaurant. The restaurant was cheap but wasn’t bad food at all.

Kim had a massaman curry and Curtis had a pad Thai.

We finished our food and were completely stuffed, then we went to our friend’s airbnb apartment then we had a few drinks whilst chatting about random stuff.

We then took the train back and got back pretty late but we had a great time.

We were up to get ready to go with our host to the local school where she volunteers as we were helping to stock check and organise a couple of cupboards.

We got to the school and we signed in, then went straight to the cupboard. We emptied the cupboard first and then explored what was in it. There was a lot of BBQ items as well as some weird items!

We were at the school for about 3 hours and then we left and headed back to the house.

Kim made a wonderful lunch of toasted Turkish bread with cheese and tomato.

After a small relax, we went with our host to Bondi Beach! Her some had a surf lesson so we went with them to explore the beach. The sun came out just as we got there and it was lovely and warm! Kim had a little swim. She wasn’t going to, but then the water smacked her in the face so she thought ‘why not?’. It was a beautiful evening on the beach so we sat and chilled there for a bit. 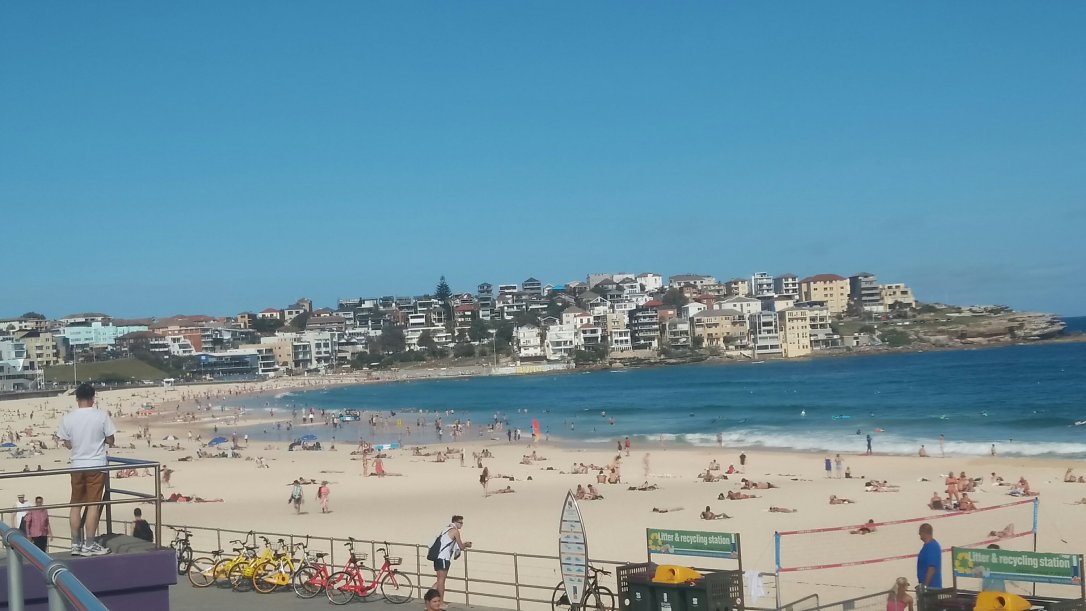 We came back after a stop at Aldi where we got dinner supplies. Kim then made hunter’s chicken with wedges and a salad.

Dinner was pretty late due to our busy day, but we had a nice end of day chat with our hosts about the change in school culture over the years… A very interesting conversation!

We woke up at a decent time to get some work done!

We started by doing some filling. The walls had previously been painted with a lot of holes in, so we worked our way around to fill the holes.

We filled the holes and then had to leave it for 3 hours to dry before sanding, so we left and took the dog for a walk and got some toothpaste and a coffee!

We got back and relaxed for a bit and then went back to the room to sand it.

We sanded for a while and then applied a second coat of filler to the holes as well as finding new holes!

We cleaned up and then had some dinner. We had mushroom, leek and zucchini pasta with salad and it was tasty!