Curtis received an email stating that there would be a large meeting happening, so he had to ensure the boardroom worked and connected with all other boardrooms.

Curtis got that setup and then sat in the meeting to ensure it all goes smoothly. The meeting was 2 hours long and Curtis didn’t understand most of it.

After the meeting, it was lunch time and Curtis met with Kim to go to a food truck.

The food trucks are all lined up along Robson Street just next to Robson Square.

We looked at what was on offer and decided to go with a hoisin chicken wrap (the wrap was a green onion pancake!). 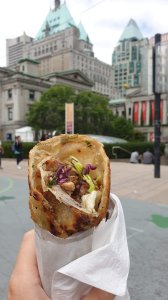 The food was really good and certainly filled us up!

We each went our seperate ways and Curtis was still busy when he got back to work.

Curtis sorted a new Mac for someone and gave them it and had to deal with a couple of tickets, too.

At 14:30, Curtis’ office had a big ice cream selection for everyone to try as a first day of summer celebration. 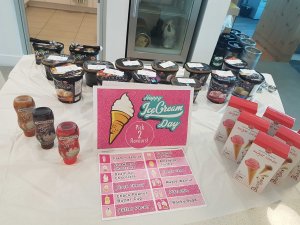 Curtis went right back to work at 14:45 and got a few final things done…it was a busy afternoon which was rare!

At 16:15, Curtis grabbed a beer and chatted with some colleagues as well as two friends of theirs from the UK.

Kim’s day was very busy but with lots of little things.

Unfortunately there were no dogs in the office today and it was Kim’s colleagues last day!

When Kim got in she had some time set aside for a catch up with a colleague who is heading out on holiday for a few weeks. They had a chat about all the training for the HR side of things to ensure Kim would be comfortable while she was away.

A little while later Kim got a call from the vendor that she missed yesterday and had a lovely introduction.

It was then lunchtime so Kim headed out to meet Curtis.

When Kim got back in the office she went through making the new business cards. It took a bit of trail and error and help from other people but Kim eventually managed to send out the drafts to people for them to review.

Kim then popped out to grab a few things for Friday afternoon drinks. The first stop was to a drug store, like Boots, to get some rainbow coloured sweets as this week we celebrated Pride month. Then it was to the liquor shop to pick up a few things.

Kim then attempted to get everything finished for the week with the final hour of work left in the day. Most things she achieved, there was one that was pushed to Monday so it was a very successful week!

It was then time to grab a drink and have a chat with some colleagues!

We met in our usual spot and walked home together.

We got home and had to take out all of our rubbish and recycling.

Once we took that out, we relaxed for a while and then Kim went to get a new toaster as ours was rubbish, so we are sending it back.

We got our new toaster setup and then watched some TV.

We got a bit peckish but not hungry enough for a proper dinner, so we decided on some toast.

We ate our toast and then had some whiskey whilst catching up on our TV we have to watch.

We woke up and had a pains au chocolat each and some strawberries.

We ate this and then spoke with Kim’s family briefly as they were at Kim’s uncle’s wedding.

We then sat down to speak with Curtis’ family, but missed them so instead we left the house and walked to Kitsilano!

Kitsilano is a very trendy, hippie and beautiful neighbourhood in Vancouver. It took us roughly 45 minutes to walk from our home across to ‘Kits’.

The weather was beautiful, with the sun beating down on us.

The majority of the walk was along the seawall, so we got to see a lot of boats and we even walked through Granville island.

We wanted to grab a coffee so we found a coffee shop called Bean Around The World. We believe this is a chain but it smelled delicious when we walked in and it was pretty well priced as well.

Curtis got a cappucino and Kim got a caramel macchiato. Both of our drinks were delicious!

Bean Around The World | Vancouver,BC

We thought we would look around for something to eat, so we went to the main area in Kitsilano to get some lunch.

Unfortunately, we were unable to find anything, so we settled for a wrap and KitKat from Whole Foods instead!

We walked to the beach which has mountain views and lots of volleyball courts! We sat and ate our lunch and then began the walk home by the side of the beach.

We walked all the way home from there which took about another 45 minutes and we were exhausted!

We got back home and relaxed for a bit as our feet hurt.

We then went out to do our shop for the week and didn’t really spend that much!

We came back and Kim made a really good dinner which was marinated pork with noodles and vegetables.

We finished up with dinner and watched the first episode of the new season of Black Mirror, followed by some Lucifer, as well as some ice cream and then whiskey!