Curtis got to work and it was just himself and his boss on the helpdesk from 07:30 until 11:30, and boy didn’t they know it!

The morning was non-stop, with almost anything that could go wrong goung wrong and even Curtis’ work’s remote access software was having a day off and not working!

The afternoon was less bad, with Curtis having pretty much one long phone call, rather than a few shorter ones.

When Curtis drove home, it was surprisingly busy again, and the sun was incredibly warm.

When we both got home, Kim exclaimed how busy her morning was, so it turns out we both had busy mornings.

We went to the shop to get strawberries and then came home and went right back out of a walk in the park next to our house.

Once we got home, Kim made delicious Swedish meatballs with mashed potatoes, mushrooms and carrots.

After dinner, we watched the first episode of NCIS:LA season 10!

It is school holidays this week, so Curtis got to work pretty early.

There were a few new cases for Curtis to look at as well as the usual Monday sift through of his unread emails.

Curtis was alone for an hour and then his boss came in but briefly left again. Curtis popped out to sell his old phone to someone just outside work and then continued with the day. The day got much busier from there as two of Curtis’ colleagues were sick and his boss was out of the office leaving just him until the Australian team came on at 11:30!

This meant Curtis had to deal with the major incidents that happened in the morning so he didn’t have much spare time in the morning.

After lunch, Curtis’ afternoon was a bit more quiet so he could get on with his back log of work!

After work, Curtis drove home which was surprisingly busy.

Kim got home and we got ready and went right back out. We were, for the first time in a few weeks, going to quiz!

We were so hungry so we ordered food as soon as we got there. Curtis got a creamy chicken and bacon pasta while Kim got a chicken pesto pizza.

After dinner, we started the quiz. Our usual quiz master wasn’t there and the replacement was not as good…

We finished in last place, unfortunately, so no free stuff!

We came home and did some research and made lunch before heading to bed.

We woke up a few times this morning but stayed in bed until 09:35.

We had cereal for breakfast and watched some videos.

We had a shower each and then did the housework. We vacuumed and hung out the laundry before we left to get the shopping done.

We didn’t get too much whilst shopping and so we had time to go to our usual coffee shop and get an iced mocha!

We went back home and Kim made lunches as well as cleaned the oven.

We then did some research for accommodation and got some booked.

We then took Nicola and Tabitha to watch Curtis’ hockey game. This game was a big one, where if Curtis’ team won, they would get 3rd in the league.

The game was a physical one, where Curtis managed to get 3 penalties, one of which was a questionable hit.

On the plus side, Curtis’ team won 1-0 and therefore secured 3rd place!

Next up is the play-off quarterfinals, where they play the last place team in the league. That’s in 2 weeks.

We got home and Curtis showered then we had a chicken burger each for dinner.

We watched two episodes of the big bang theory and then did some more research.

We woke up at 09:30 and had some cereal for breakfast. Curtis spent the morning watching hockey and Kim procrastinated.

After watching hockey, we went down town and parked near Curtis’ work before walking to the barber (which is in a pub!).

The weather was beautiful today!

Curtis got his hair cut which feels and looks much better. 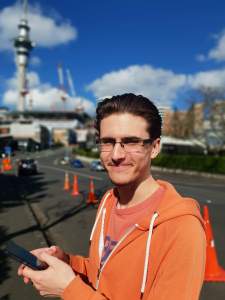 We left the pub and walked to the city and got a mcdonalds for lunch! We had two free sundaes too, so we got those.

We went back to the car and drove back home.

Once we got home, we finally booked our flight out of New Zealand!

Kim then went out to Takapuna with Tabitha. Kim walked along the beach and went for a hot chocolate. 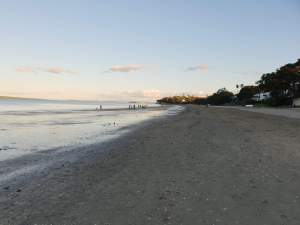 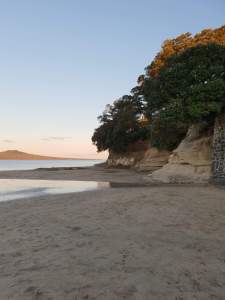 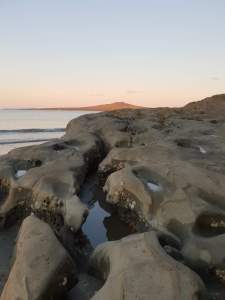 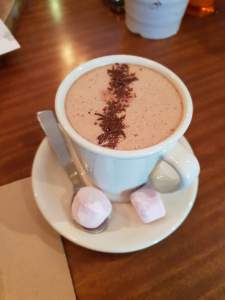 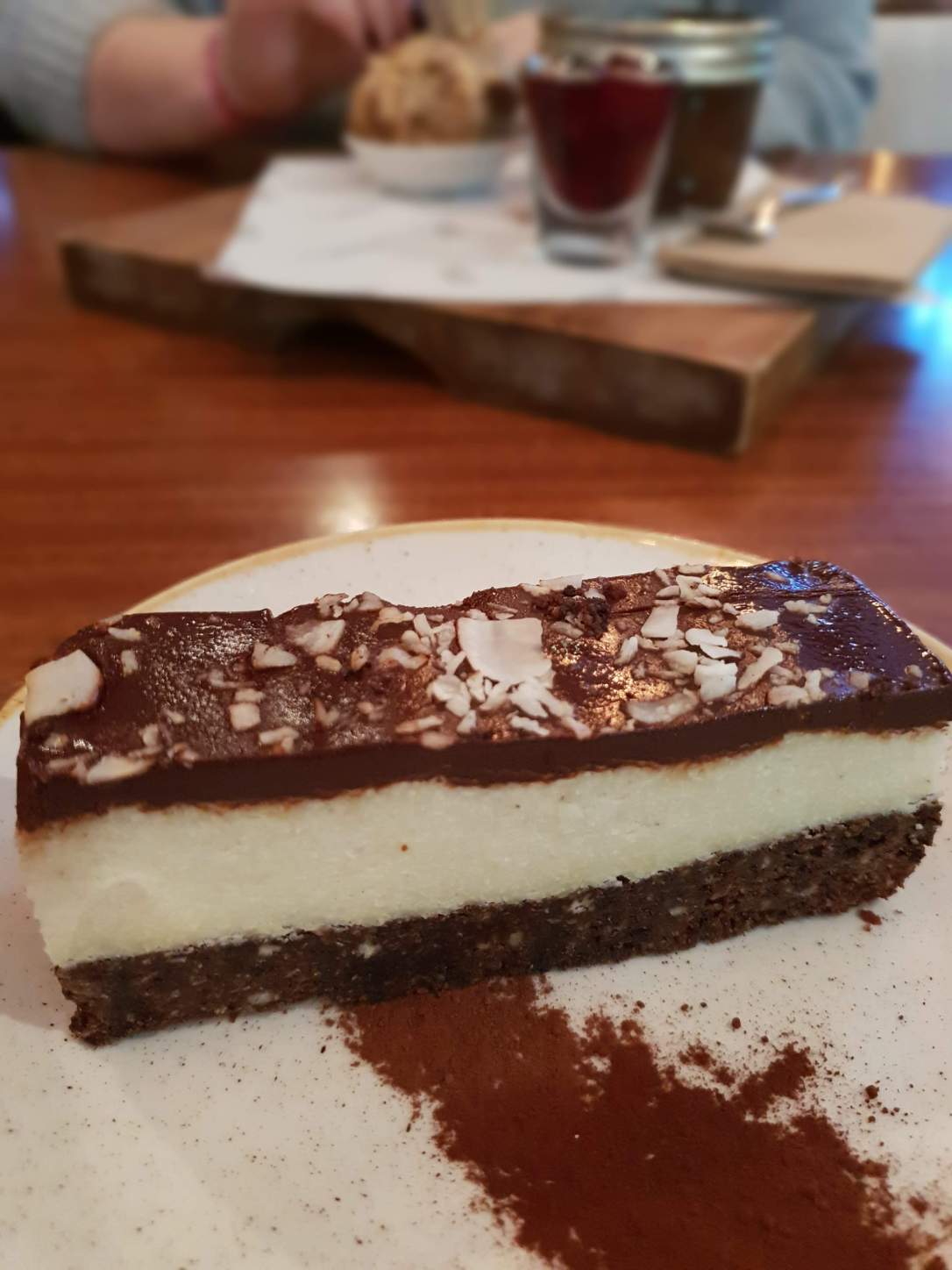 We had chicken burgers for dinner with home-made wedges and corn on the cob.

After this, we spoke with Kim’s family on FaceTime, then it was bedtime.

Curtis’ day started very slow but he got some essential things done.

At about 10:30, the day got much more busy but very interesting. A specific part of some software wasn’t working and Curtis offered to help fix it which ended up taking most of the day and multiple people!

On the journey home, the traffic was incredibly busy, but Curtis still got home around 17:00.

Kim got home and got ready and we then got an Uber down to Eden Park. We went to Burger Fuel once we arrived and got the Korean chicken burger, which was just ok.

We got free tickets to watch the rugby from Kim’s work!

When we arrived at the stadium, we entered and went to the ‘lounge’. This was where there was a ‘paid’ bar and the seats were higher than the ‘regular’ seats.

We were approached by one of Kim’s colleagues who gave us tickets to go to the corporate suite!

We got free drinks and food and also got to watch the game from a box. This was an incredible experience, even though Auckland lost to a team in the division below them!

We were there for a few hours and then we got an Uber home. Our uber driver was really nice and we had a great conversation all the way home.

Once we got home, it was bed time.

Curtis got to work and the phone rang shortly after, as he was setting up his laptop! This meant Curtis had to fumble around trying to get it setup before answering the phone.

The accountants, who only go to the office one day a week, arrived and they had Samosas for Curtis and his team! Curtis did pay for these as they were being sold for fundraising. Curtis therefore went home with 10 samosas.

Once we both were home, we went to the gym. We spent a good 45 minutes to an hour at the gym, using different machines the whole time. It was a good workout! We normally start on the crosstrainer but they were all full so we went on the treadmill instead which we didn’t really like.

On the way home we stopped at the supermarket to get a few things.

We watched some videos and the latest great British bake off episode.

Curtis got to work and put on a pot of coffee, which ended up being way too strong!

Curtis had a few things to do again, but this got interrupted when a client said that their website was down, so Curtis had to deal with that which took him up to lunch time.

After lunch, Curtis used the time to get the rest of his cases sorted and he managed to get a few done.

Kim got home and went straight to the gym.

Once Kim got home from the gym, we ate some pizza and chicken for dinner whilst watching a few YouTube videos. Curtis also cooked some rice for us to have with lunch tomorrow.

We watched a few more YouTube videos and then did some accommodation research for our next road trip.

The moon this evening was ridiculously big and bright…looked incredible.

Curtis had a good sleep last night, which was a relief.

Curtis got to work at the usual time and began working on his cases and answering emails.

He had a big chunk of work to get done which he worked on throughout the day.

During lunch, Curtis had to go down to a client as they had an external contractor arrive which Curtis had to help with. Originally, Curtis drove down to the client which was in the city. Unfortunately, there was no parking anywhere and it was raining and hailing so Curtis went back to work and got dropped off to the client by his boss.

Curtis spent a while at the client and then risked the walk back. The wind was so powerful that Curtis nearly got blown over a few times!

Curtis got back to the office, finished off a few cases and did some admin before leaving the office at 16:10.

When we were both home, Kim spent most of the evening booking some things for a trip we are taking soon.

We had leftover chilli for dinner and Curtis made amazing rice again! We watched TV whilst we ate and then got dessert we had popcorn and Maltesers.

Curtis just got to work on time after leaving a bit late after he didn’t sleep well at all last night.

Curtis got to work and again, right from the get go, had some emails to check and reply to as well as some other things.

The work seemed to pile on again today, but Curtis did get to do some different, interesting things which made time go fast.

Once Kim got home, we went for a walk to the supermarket, which seemed like a good idea until it started to rain. Luckily, we arrived at the perfect time and got into the shop nice and dry.

As we left the supermarket, it was a much different story! It was absolutely chucking it down…we waited for a bit and then braved it. We ducked into a Chinese bakery and looked at the goods on offer to have another break from the weather. When we left, the rain had subsided a little so we hastily made our way back home.

Once we got home, we made a delicious chilli con carne. Curtis made what is probably the best rice ever made and they whole meal was phenomenal!

We watched a few more episodes of No Offence which made us incredibly tense and then went to bed, hoping to get a better night of sleep.

We had cereal for breakfast and watched a YouTube video.

After breakfast, Curtis watched the Leafs game and Kim chilled out.

After the Leafs game, we went out to Takapuna and went for a walk along the beach! The weather was absolutely beautiful. 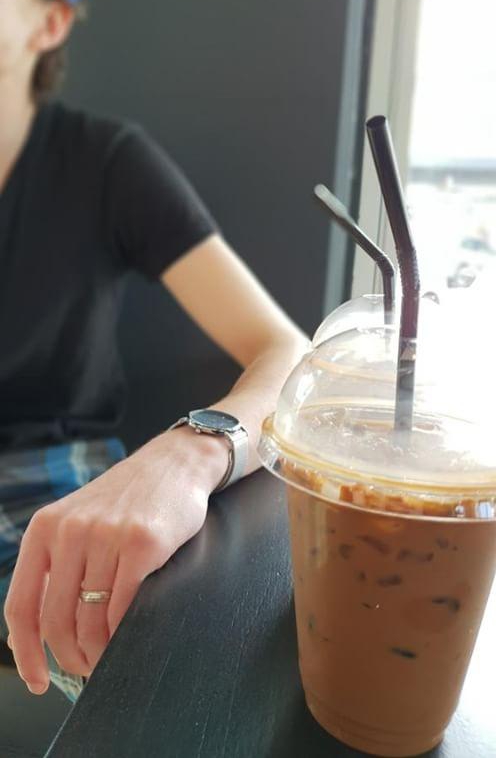 We ate our Banh Mi and drank our Vietnamese coffee and went to the beach.

There was a lot of dogs which was great for Kim. We walked up and down the beach and chatted for ages!

After the beach we went to the shop to get some food for tonight as well as the week.

After the shop, we went back home and relaxed for the evening.

We watched two episodes of a Swedish/British TV show, called Fallet, and then played a bit of fortnite which we haven’t done for a while!

After this, we had our lasagne we bought for dinner.

Post dinner, we watched No Offence (thanks Tom & Maggie for letting us know it’s out!) And then spoke to Kim’s family on FaceTime.

Curtis didn’t get his haircut today as he didn’t want to go somewhere that wasn’t his usual barber…That’s a next week job.