Curtis had quite a quiet morning, but did a few things here and there.

After lunch, it got a bit busier, with a few tickets coming in together and Curtis jumped on those, as well as some people reporting some other issues which Curtis helped with too.

At the end of the day, Curtis was informed of someone leaving the company tomorrow so he had to organise their equipment return.

Kim started her day with a quick call with a teammate to help them with a question they had and set up a few things on their calendar. She then spent a small amount of time preparing for her meetings for the day before hosting an onboarding.

After the onboarding Kim had a meeting planned to go over some HR things. The meeting covered kittle of what was planned, but was very productive and useful!

Kim then joined the recruitment meeting to discuss the open roles and the next steps.

For the afternoon Kim had a lot of little meetings and organised a few IT things as well as looked at candidates for an open position that the company has.

Kim went out to get some chicken and once she got back we had Katsu Curry!

We had the sauce already, so we just needed to bread and fry the chicken (and make rice).

We ate that and watched some TV for the evening.

Curtis’ team won their game last night, which was good, but there was controversy again!

The other team’s goalie pulled his groin at the end of the 1st period, so the other team had to get a player into the goalie gear and play him in net!

Curtis managed to get an assist and his team won 4-1, but felt bad for the other team a bit and hoped the goalie was ok!

We went out today for a walk to and around Stanley Park.

We walked a different way to get to an Italian coffee shop which we had some nice coffee from!

We had a long walk for a few hours and it was much colder due to it being autumn now. It was beautiful outside, but much colder.

We got home and relaxed for a bit, playing some games, doing some research for our PR & watching some TV.

We then went out to do the shop at around 17:45, which felt much later as it was so dark!

We got the shop done and headed back home, where Kim made a chicken katsu curry.

The chicken was really good, but for some reason the sauce didn’t turn out ask expected, which was a little disappointing.

We chilled out for the evening, it was a little colder too than it has been, so it felt nice and cosy.

Curtis had a meeting right at 09:00, which was company wide. It wasn’t massively interesting, but it was informative.

Curtis had a some more checkups to do and then he had a team meeting.

After the meeting, Curtis needed to order some items for the office, so he got those together and ordered.

For the rest of the day, Curtis did some tickets and also had a 1 on 1 meeting.

Kim slept in! She has nowhere to be and most people said to take it easy for a few days and rest up, so she is. She woke up and went through some really lovely messages from friends, family and old colleagues all offering support, love and advice. She felt very lucky today!

She took a few phone calls in the morning, one about her insurance and they went over what happens next and the other wad about the car. The garage found the issue so hopefully they should stop having problems when its all fixed up.

For most of the morning Kim did nothing. She reached out to people to see if they would endorse her on LinkedIn and that was it!

In the afternoon Kim sat down and started doing something productive. She reorganised her LinkedIn page by changing her experiences to read a little better and make a bit more sense. Kim also added in a bit of info that explains the employment gaps for her trips around the world and the roadtrip in America last year! Now she has no employment gaps. She made a few notes to update her CV with her latest job, but decided that thats a tomorrow job.

We watched a bit of TV after Curtis finished work but we got hungry, so Kim made some homemade katsu chicken curry.

We had leftover homemade sauce from a while ago and Kim lightly fried the chicken.

Kim also made a vinaigrette for a side salad, which we had with it. It was really, really good. 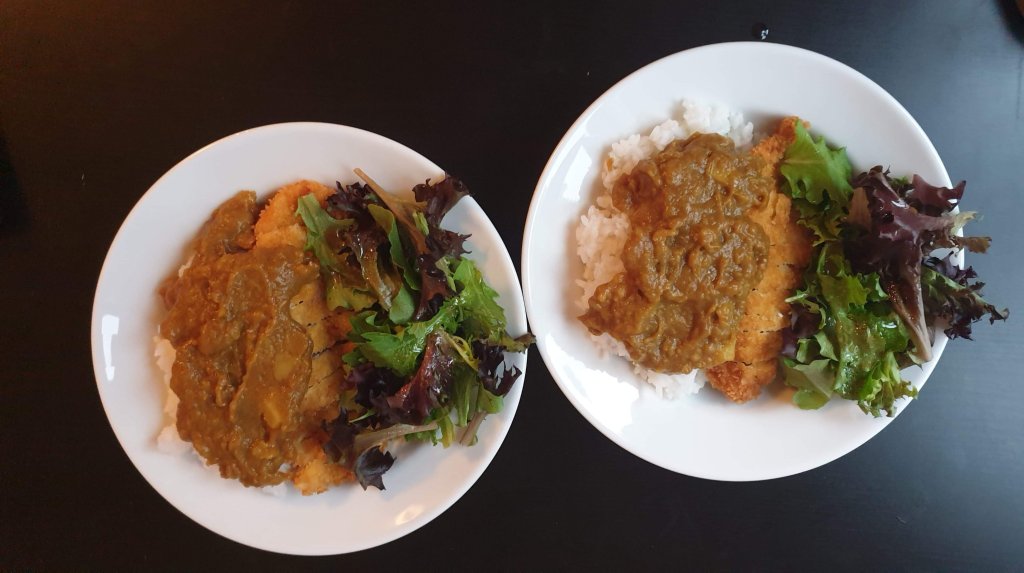 We ate this and then watched some more TV, including The Russell Howard Hour (a UK comedy show) and some YouTube videos.