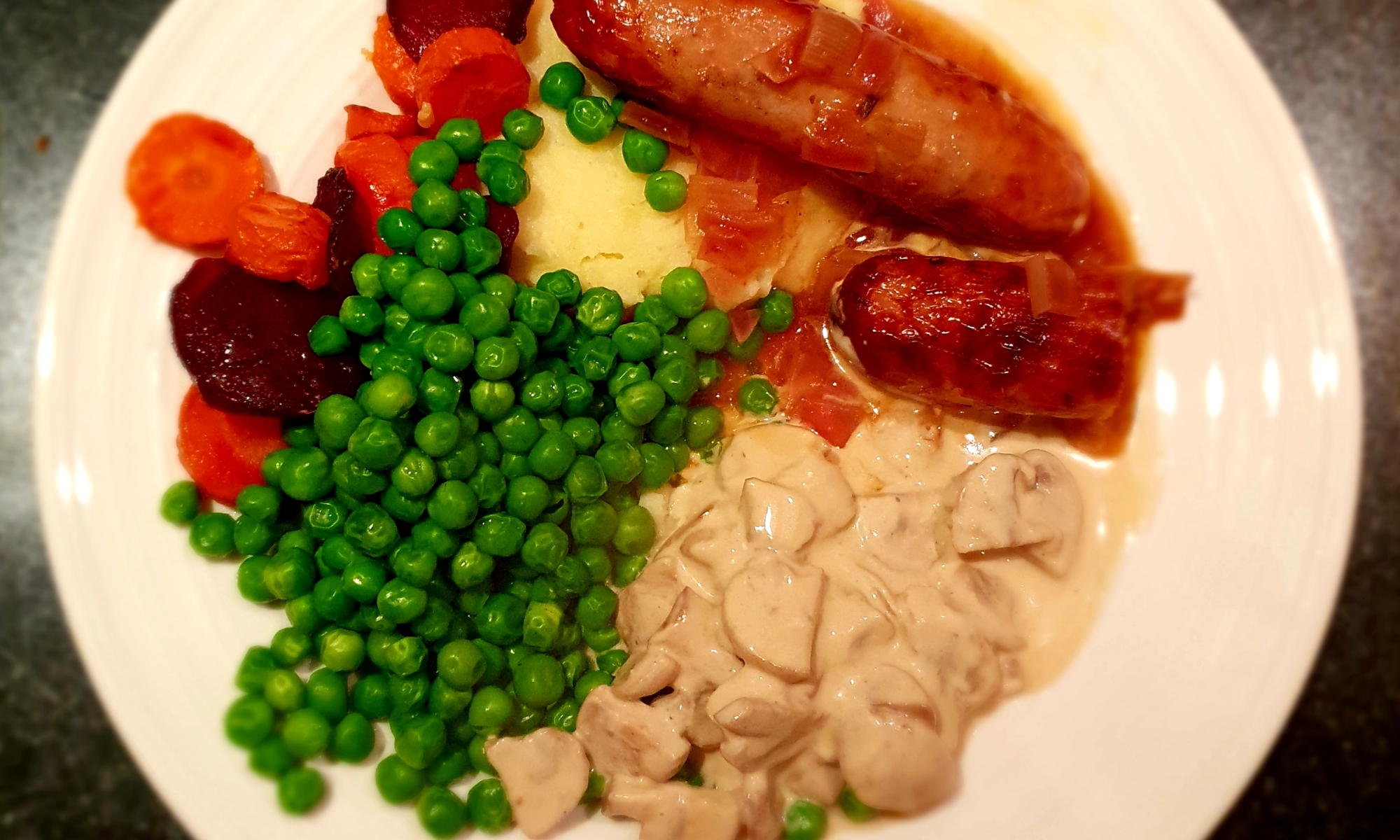 Curtis got to work and answered emails and checked the helpdesk.

For most of the day, there wasn’t a huge amount to do. This did mean that Curtis could catch up on some training, though!

Kim went to the gym in the evening whilst curtis set up and played on his new phone! Curtis got a Samsung galaxy S9 and it’s great! This should also help us get amazing quality photos during the rest of our travels.

Kim made sausage, mash and vegetables for dinner which was excellent!

We watched some YouTube videos and then went to sleep. The evening disappeared today!

We woke up at 07:30 which was not an acceptable time to be awake so we decided to force ourselves to sleep for another 3 hours.

We woke up and had some breakfast. We had cereal, nothing fancy.

We then had to go to get some shopping that we forgot as well as look for a jumper for Kim.

We did that and then got back home and had a bit of time before Curtis’ hockey game.

We did a spring clean whilst we waited for the time to pass! Vacuuming everything, cleaning the bathroom items and everything in between. Everything looked great when we were done.

Tabitha came round and we left to go to Curtis’ hockey game.

This was Curtis’ last game for about a month as he is away next weekend and then there isn’t a game for 3 weeks after that.

Curtis got changed and then a teammate noticed something off with his skate blade. The end of the blade had snapped off! This was pretty dangerous to go on the ice with so Curtis went to skate hire to see if they had anything he could use.

After some looking around, they had some fairly decent skates which fit Curtis pretty well, though they were quite uncomfortable!

Curtis was unsure during warm up as the right skate was not sharp at all and was sliding around the place! It took a bit of getting used to but the game went pretty well for Curtis, considering.

The game ended 1-1 and it was a good game too! Curtis got an assist too.

We drove home and had our leftover Swedish meatballs which was delicious again and watched some TV then had an early (ish) nice.

We woke up at 10:30 and were both very hungry. We only had Weetbix in the house for breakfast but wanted something a bit nicer. Kim decided she would make crepes!

Kim started to make crepes, but they didn’t work out too great, so we scrapped that and Kim said there was a nice cafe in Birkenhead so we went there for breakfast.

We wanted a Coffix too but they were closed!

We got a chocolate swirl each and then went home. We watched some TV and YouTube videos and then went out to do the shop. We didn’t need much food for this week, so it didn’t take long. We got a coffee from Little Things too, which was a bonus!

We got home and Kim went right back out again to spend some time with Tabitha.

Kim picked Tabitha up and then they headed up to Albany to do some shopping. After about an hour and a half, the shops started to close, an hour before they thought they would! So Kim drove Tabitha home and then headed home via the shop to get some stuff for dinner.

Kim got home and we just chilled out some more before we made dinner.

We had Swedish meatballs again because they’re easy and tasty! 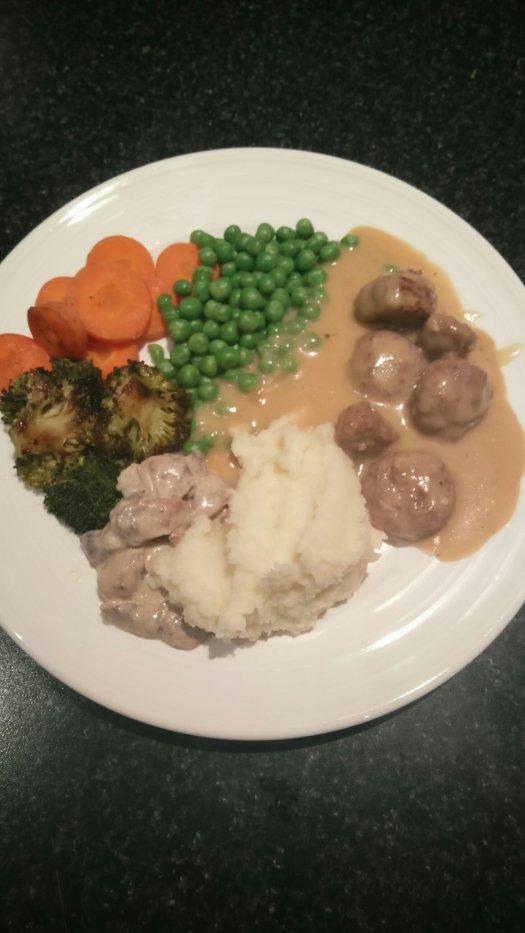 We ate this and then played some fortnite before heading to Netflix to see what was there.

We found something made by the creators of The Simpsons which looked hilarious called Disenchantment!

We watched this a bit and then headed to bed. A perfect Saturday!

Curtis had a very busy morning and before he knew it, 11:00 hit!

Curtis showered, did one load of laundry, ironed and emptied the dishwasher before chilling for the rest of the day.

When Kim got home, we went to Glenfield Mall to get some food from the food court! We normally wouldn’t think of eating there but we saw a Japanese donburi place there last time so we had to try it out!

We got a bowl each where you get a choice of vegetables on top of rice and two meat choices too.

We both had the same vegetables (sweetcorn, peas, green beans & carrot.

Kim had two types of chicken and Curtis had lemon pork and soy chicken.

We took this home (along with a doughnut) and sat in front of the TV for the evening and watched a lot of TV! It was a great night.

Curtis arrived at work and was able to start getting some work done. The day slowed down halfway through the morning and then of course picked up again after lunch! Curtis got an email about a database that wasn’t working. This kept Curtis busy all afternoon though it was interesting as it was something new to deal with.

Curtis managed to fix it and then went home.

We both got home and got ready for the gym.

We went to the gym and went on the cross trainer for 10 minutes to break a sweat before going to a few different workout machines.

We left the gym and went to the shop to get some dinner.

For dinner, we had duck wraps with spring onions and cucumber.

We also had some pork and duck bao. 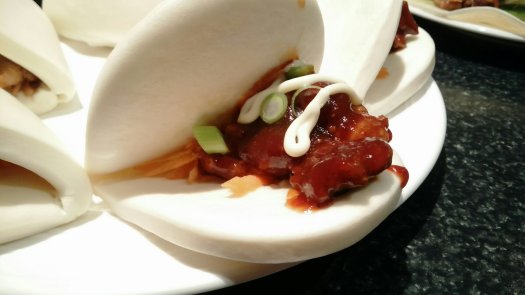 We ate this and then watched a few TV shows.

Curtis woke up at the same time as Kim which is later then he normally wakes up!

Curtis had to go to Wellington again today, his flight was at 11:50.

Curtis got to the airport and parked (incredibly far away!) and made his way in.

Curtis got through security and then got a coffee. The Cafe was upstairs and his gate was downstairs, so he had to go upstairs to get it and then go a long way (it’s one way up and the opposite way down) to get it, but it was worth it!

Once Curtis was at the gate, he did some work and then boarded the plane.

The flight was pretty bumpy but there were no issues.

Curtis got to the client and had a list of things to complete, which he did.

Curtis was at the client for 2.5 hours when he then left to go to the airport.

Curtis left a bit later then he wanted due to work but was still there with more than enough time.

At the airport, there was a pop-up craft beer bar which Curtis took advantage of and got a very nice Pilsner from.

Curtis got on the plane and had another bumpy flight but it went pretty quick.

Curtis got to his car at the airport and had a fairly swift drive home.

Kim went to the gym directly after work.

When Curtis got home, Kim was home and we had some dinner (leftover risotto).

Kim went out to see Tabitha at a chocolate cafe and had the chocolate smores cake again, which is still delicious!

Curtis got to the office and got on with work.

Curtis also helped out with getting stuff ready for the lunchtime ‘Braai’ (A South African BBQ).

Curtis was pretty busy all morning but was really looking forward to the BBQ!

At 12:45, the BBQ got going! Curtis had two boerewors (South African Sausage), some ‘Sloppy Joe’ made by his colleague, some homemade ‘South African Style’ potato salad and two other green salads.

Curtis had a nice extended lunch just chatting with his colleagues!

In the afternoon he was able to finish off a few things and then he went home.

Kim went to the gym in the evening and then when she came home she made a risotto.

We had a but of difficulty whilst cooking when the ceramic dish we were using exploded! We transferred it to a pan and continued cooking. Dinner was delicious!

Curtis is off to Wellington for the day again tomorrow.