We got to the airport around 05:30, checked our bags and headed right to the gate.

We got a little bored so we walked around and Curtis got a coffee.

Soon enough, we boarded the plane (which was to New Orleans, Kansas & Chicago!) And managed to get seats together.

The flight was just 1 hour 36 minutes and then we were in New Orleans!

The weather was terrible for our arrival! We got dropped at our Airbnb but couldn’t check in yet. We left our bags and walked to a bakery for breakfast.

We found Laurel Street Bakery which is fairly close to us. We were very hungry, so ordered a lot of food. We were tired too, so got a big coffee each. 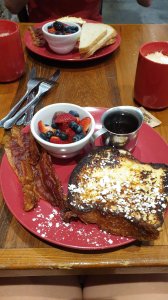 The food was pretty good and the coffee was perfect!

We decided we would get a bus ticket for 5 days, so we had to first pay for a single bus ticket ($1.25 each) and get about 10 minutes down the street to a ticket machine. Unfortunately, as we stepped off the bus, the rain came down and we got drenched!

It then turned out we needed exact cash for the machine and our card didn’t work in the machine, so we went to McDonald’s to get change. They said they wouldn’t be able to change it, so we had to go to the gas station next door who gladly changed it for us.

We got our tickets and were able to travel, but by this point we were drenched, it was still raining and we were very tired. Luckily, our room was ready so we went back to the Airbnb to shower and change out of our wet clothes.

Once this was done, Curtis fell asleep for a couple of hours and Kim did some admin. By the time Curtis awoke, it had stopped raining and the weather had cleared up.

We went out to the bus stop just by our house and as we were waiting, our Airbnb host arrived back home and offered us a lift down to the French Quarter, which was very nice of her to do!

We had a plan to go to the voodoo museum, so we walked that way, accidentally coming into contact with the famous Bourbon Street, which was fun.

The voodoo museum was just $5 each and pretty small, but it had tid bits of information around the place, real artifacts from the history of voodoo and a lot of interesting things. We spent much longer than anticipated in there, considering it was just 2 rooms.

We briefly visited the Louis Armstrong park, which seemed to just be full of abandoned buildings. That being said, the buildings were cool and the main one an old auditorium.

We walked all around the park and saw some cool buildings and even cooler bridges.

We got hungry so it was food time.

Our host had told us about Po-Boys which are a traditional Louisiana sandwich, so we found the place she recommended which was called Mahony’s.

Curtis had the traditional fried shrimp sandwich and Kim had an angus beef sandwich.

They were pretty good, but the beef was much better than the shrimp.

We got a cocktail each too with Curtis getting an old fashioned and Kim having a coconut mojito.

We went for a drink on Bourbon street, after finding the cheapest place we could.

We also wandered around to see what was there and also watched a group of children playing the drums. The atmosphere was pretty good but we were also very tired.

We walked down to the canal for a quick look and saw that they have a steamboat that goes from there, which was awesome to watch!

We were almost asleep by this point, so went to take the tram and then bus home.

We waited for the tram for a while and nothing showed…we ended up waiting way too long but finally got on the tram in the right direction.

We then waited 10 minutes for a bus to take us home and once got back we were pretty done.

We watched a bit of TV, did some more admin and went to bed.