Curtis got to work and had a cold brew that Kim got him and it wasn’t great and actually made Curtis feel a little unwell.

Curtis got a few ticket in the morning and some were a bit more complicated which was excellent for him, making the time go fast.

After lunch, which Curtis ate even though he didn’t feel too good, he was kinda out of things to do, but started doing part of a project which was to write up policies.

The later and later it got in the day, the closer it got to hockey time, so Curtis was getting more and more nervous!

Curtis left and found and umbrella at work, so took that to walk home with!

This morning there was no catering, but Kim was in a 2 hour fire safety warden training so that ate up most of her morning. After the course Kim caught up on her emails, mainly with a supplier and the caterers for next week.

Then the weekly pizza came in so Kim sorted that out before jumping on a call with the regular catering company they use to discuss the trail that Kim had used. They talked about a few tweaks Kim wanted to make. It was a really successful call.

Then the fire drill started. Kim grabbed her high vis and ushered everyone out of the building and then spent the time hearding cats to try to get everyone in the same place!

After the fire drill kim and the other new fire wardens had a debrief.
When she got back to the office, Kim took 5 to have a sit down as it was almost 3! Then she rememebrred that she had a 3pm deadline to contact the hotel that she was speaking to yesterday to fully resolve the issue. She sorted all that and then put the remainder of the doughnuts from yesterday out!

Kim then spent most of the rest of her day listening to voicemail messages and picking through the backlog of emails she has.

We got back home and had some pizza and then watched some TV. Around 19:15, we left and got into the car, heading to the Richmond Olympic Oval.

The traffic was abysmal and even when we got there, there was a queue to drive into the parking.

The parking is meant to be $2 per hour, but it didn’t give us a ticket so we parked for free!

We got a spot and then as Curtis was walking, he slipped on the wet floor and broke his flip flop, so he had to walk barefoot for the rest of the way.

The arena is huge, but we each finally found our spots.

The changing room was massive, and there is 8 of them, so Curtis had plenty of room!

After a brief changing room discussion, it was warm up time…And then game time! 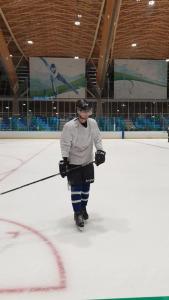 It started well and Curtis’ team were actually able to get the first goal.

It was a very close game and Curtis had some good chances, but the game ended 6-1 the other way! Technically, it was 9-1, but after a 5 goal lead, the goals stop counting.

After the game, we drove home and were super tired. Now here we are, writing the blog!