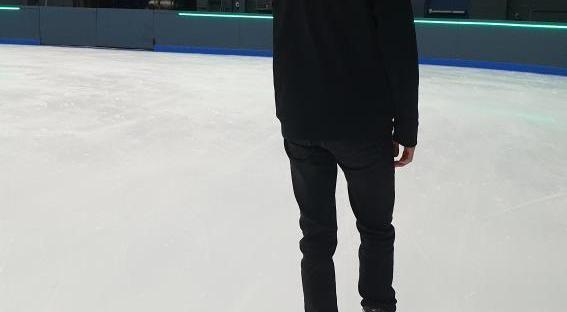 We got up at 11:00, which was a great sleep in for us.We had breakfast and then got ready for the day.Curtis wanted to go ice skating to test the ice skates he bought before the hockey season starts just to see if they fit right, he can skate in them etc.We took the car for its first drive, driving out to the Botany 8-Rinks arena which took us about 25 minutes. The car drives great and we didn’t crash, which is a positive.We got to the rink and paid just $5 each for 1.5 hours of skating as well as $3 for some skates for Kim.The arena has 8 rinks, surprisingly, and we were on the figure skating rink. There weren’t too many people there and we were able to get our skating on!

We had a really good time but only did about an hour as we got a bit tired. Curtis’ skates are a little stiff, which is expected with higher end skates, but he was able to skate really well in them, so he is hoping they will work great when the season starts.

We drove from the rink to Metropolis, just 10 minutes down the road.We parked in the free underground parking and then went in and headed right to Starbucks.We each got a caramel iced latte and just sat and relaxed for a bit.After that, we bought cinema tickets for the Lion King and then went to a few shops before the film started.Kim needed to get some items for exercise, so we found some of those which was successful.

We got into the cinema just in time for the trailers and then watched the Lion King.We thought the animation of the film was amazing and it was quite funny at points, but Kim wasn’t too happy that they missed some parts out!

We Lost The Car!

We left the cinema and wanted to head home.The only problem was, we couldn’t find the car!We walked around for a while and eventually found it. We swear it was a maze in that carpark.We drove back home and we were actually very tired. We weren’t meant to do anything today and were out for 7 hours!Kim walked up to Canadian Tire to get some supplies and then when she came back, we watched some TV.Weirdly, neither of us were that hungry, but we did have snacks at the cinema. Therefore, Curtis had some toast and Kim had a pop tart.Tomorrow, we REALLY plan to do nothing.