Curtis had plans for the morning but he had to do some tickets and some admin and before he knew it, 1.5 hours had passed!Eventually, Curtis got onto setting up a new user, their laptop and their desk. Then, it was lunch time!

After lunch, Curtis spent the whole afternoon trying to get the virtual machine to work. He concluded that it will not work, so back to square one it is.He walked up to Kim’s work to meet her there after work.

Today Kim left dor work 2 hours early as a film crew had to set up for an interview for an employee Kim works with. On the way to worm she saw a seal, so getting up so early didn’t seem too bad!
When Kim got to work she found out that the crew would he about half an hour late so she ran to McDonald’s to grab some breakfast!
When she got back she then set up an urn of coffee and a plate of biscuits and ran it up for the 25th floor and they still weren’t there. So Kim went back down and began to tackle the mess of food and drinks leftover from the day before. She started with the drinks and was able to put some in the free drinks fridge and rearrange some of the other storage to make room for the rest.
Kim then went to the roof again to see if the crew had arrived and they had, and were setting up! Which was great news. When she got back to her desk Kim went through and saved the last 3 or 4 days worth of invoices that she neglected to do and chase for a couple from yesterday.
She then spent some more time organising the food and other picnic stuff from the day before, making sure everything was boxed up and tidied away.
Kim.
Kim and her colleague set up some time to go over the summer party and how well it went. Both of them had recieved great feedback, but came up with ways to make it go easier for us for the next time. This meeting was interrupted a little with the arrival of pizza for someone elses meeting.
Once the pizza was out in the kitchen for a free-for-all Kim was sure to grab herself and her colleague some slices before the masses arrive, we refer to it as the pizza tax! Kim the spent a few minutes on the roof before getting too hot and heading back to the comfort of aircon!
After lunch Kim finally convinced herself to finish the last bit of organising and tidying up. Then she went over to FedEx to send something that had been set up the day before. It turns out that they couldn’t deliver it as it is a PO box so Kim just had a nice long walk outside instead!

When she got back Kim spent the rest of the afternoon catching up on emails.

We went to a nice Italian place that Kim had been to before.We both got a wine and a half portion of pasta as neither of us were that hungry and their portions are huge!

Kim got the same as she had before which is pasta with a creamy sauce, mushrooms, chicken and peas. Curtis got a simple tomato pasta and they were both great!

We got to the venue that Dean Lewis was playing at and there was a huge queue all the way around the block!We queued for around 30 minutes and then in we went.

We opted for seats rather than standing and it was a pretty good call as it was a 30 minute wait before any music!

We had a supporting act first and he was actually terrific. His name is Scott Helman and he is from Toronto. 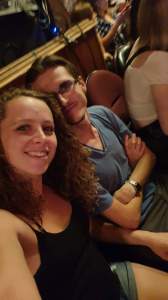 After Scott, there was a 30 minute break and then Dean Lewis appeared! It was a great set, great lightong and he sounded excellent. 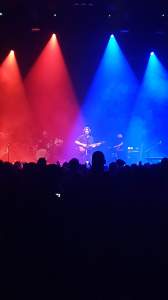 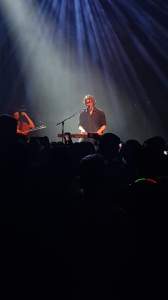 The theatre was sold out, around 1300 people! After the few hours we were there, we left at around 22:00 and walked back home.We got some admin done and then unwound by watching a video or two on YouTube and then went to bed.