Curtis had a non stop day again today, but it was perfect! The day went incredibly fast.

Just after lunch, Curtis went down to the lobby of the building as they were doing a ‘building appreciation day’. This meant that every person got a free cold brew coffee and an ice cream sandwich!

Curtis got his free stuff and went and sat outside with some colleagues to eat it.

After finishing his first cold brew, Curtis went and got another one because he could!

Curtis got some more of the Apple Macs sorted and then went and had some drinks with colleagues.

This morning Kim sorted the fruit when she got in, binned the mouldy grapes and replaced them. She later went back in to the kitchen to make a little fruit salad and also cut and freeze some fruit for a drink she had planned for the afternoon.

Kim then spent some time orgnaising a day trip for a few differnt people who have arranged for a summer outing. She and the representative kept missing each other so Kim will solidify the plans next Tuesday. She also placed the food order to arrive for the following week.

As there is a day off on Monday kim then drafted and sent out the company wide notification email.

The Vancouver Pride March is on this coming Sunday so the theme for this weeks Friday afternoons drinks is Pride! Kim went out to the dollar store to pick up more decorations. She got rsimbow banners, flags and treat pots. After this Kim went and got a cake from a local supermarket as she had a great idea! Then on her way back to the office Kim picked up the wine and beer. It was a very successful trip out of the office.

The cake kim bought was a lemon bundt style cake, so it had a hole in the middle. Kim filled it with skittles and then ‘iced’ the top with coconut whipped cream and decorated it with a skittle heart! 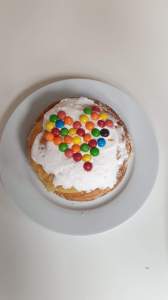 Kim then spent some time going through her phone messages and catching up on emails before and after her lunch.

Towards the end of the day Kim decorated the kitchen with everything she had gotten earlier, but still felt it was lacking something. So she made a small thing of pride glad bunting and hung that near the table and that perfected the room! 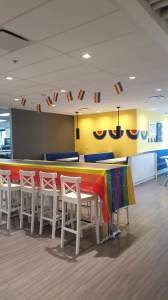 Kim then made the foundations for the Sangria type drink! She had found a sparkling rose can that donates to charity so bought 3, chopped and froze fruit throughout the week to make a wonderful little summer drink! She started by putting the frozen fruit into 2 pitchers, adding a little triple sec and ginger beer and letting it marinate while she set up the rest of the glasses and drinks. Once everything else was set up Kim poured the rose in and everything was ready to go. 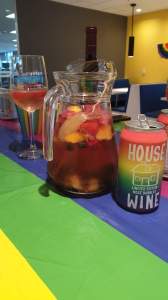 People started arriving and then 10 minutes in Kim set up and started the game of Pride Anthems guess the song. There were 20 songs and Kim played various lengths of parts of songs and points were awarded for song and artist name. It was so fun! There were songs that people expected to heat that didn’t come up, so there is a possibility of round 2 this coming Friday. That way the people who were away for the long weekend can join in the fun too.

People left right after the game, which was to be expected, so Kim packed away the drinks and table cloths, but decided the flags and bunting could stay up a little while longer. Then she headed home herself.

We forgot to take anything out for dinner, so had to decide what to have.

We were incredibly lazy when we got home and did nothing for over an hour and then went up to Wendy’s to get some food.

Curtis wasn’t too hungry so just got a cheeseburger and Kim got a big chicken burger meal.

We have a long weekend this weekend and we may do something but mostly we want to sleep!

Feel like its time to buy a watch? Well, you can with a 20% discount at www.capitolawatches.com! Use code MRANDMRSHALE at checkout.