We woke up fairly early, had breakfast and then did some chores around the apartment.

After we finished, we walked down to meet Linda at her hotel.

It was hot again today, but we decided to walk along the seawall. We walked all the way to the seawall from the hotel and then down to the seabus where we caught it to Graville Island.

When we got there, we scoped out a coffee place once we found one, all three of us got an iced latte.

We had a bit of a wander around but then wanted to get out of the crowds, so we continued around the seawall and towards our apartment. 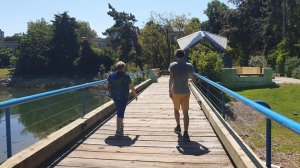 We stopped in at our apartment to have a sit down and some water as well as to show Linda around.

We had only been walking around for about 1.5 hours in total, even though it felt like a lot more!

We relaxed here for a couple of hours but all started to fall asleep so thought it would be best if we went outside again.

We went for a walk down to the city, to the hotel Linda is staying in, where we had a dinner reservation.

Kim had been to this restaurant with work before and knew it was tremendous so she recommended that we go.

We got there at 16:30 but our table was booked for 17:00. We were so hungry after all our walking, so we decided we would sit and have dinner then!

We got sat and got a cocktail each. Kim and Linda had a Piña Colada and Curtis had an Old fashioned. 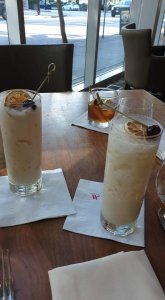 We waited a little bit but then ordered our starters. We had chicken wings, amazing sourdough with butter and honey as well as some tempura salmon.

The salmon wasn’t great, but everything else was so good. (We forgot to get photos of that as we were so hungry!).

For mains, we got Korean chicken, a salad and mac & cheese. All of these were great, but the mac and cheese was phenomenal.

We had such a great night and whilst we were full, all three of us shared a dessert because it would be rude not to.

We got a chocolate mousse with lemon creme and some ice cream of some sort and it was incredible, but we are glad we only got the one!

We said goodbye to Linda as she leaves early tomorrow and we waddled home.

Once we got back, we watched some TV, did some admin and had an early night. It’s been a great weekend, but we are tired!