Curtis arrived at work and had 2 people waiting for him before he could even turn on his laptop.

The first person had forgotten their laptop at home, so Curtis had to find a temporary replacement and set that up for them.

Curtis then had to sort out the second person who had some issues with their monitor not connecting to their laptop. When Curtis went to investigate, he realised that the cable connecting the two had slightly come out of the monitor, so when he plugged it back in, it worked. Nice and easy. This was all before 09:00!

Curtis had a really busy morning, but it was great! Lots of different things to do as well as some incidents Curtis was able to resolve.

The afternoon was much quieter so it was some regular tasks and onboarding that Curtis did to keep himself busy, before walking home.

Today Kim was so busy and she loved it.

Kim got into the office and started with a few of the receptionist tasks to start her day and then went and settled down in the HR area to practise a few more tasks there.

Just as she got comfortable Kim was invited out for a coffee and handover of some events stuff with two colleagues. So they went to a nearby coffee shop, grabbed a drink and pastry and ironed out some details. It was lovely to get out of the office and sit outside while still working!

When she got back Kim spent the morning between the 2 desks balancing HR back office stuff and front desk project stuff. Kim then attended a meeting for some more HR help and set up a few other meetings for the afternoon. A big part of the project Kim is working on takes place over the weekend so now is the time to get cracking!

Kim then treated herself to a whole 15 minute lunch break and spent it in the sun on the roof with some of her colleagues.

Kim was then back in the office and setting up for a meeting with people from our other offices. It was great to get there opinions on the project and try to answer any questions they may have.

Kim then had 15 minutes between that meeting and her next, which was back to HR for more training on the back office stuff. Kim had some guidance on one part and was then left to try one on her own! She only made 2 minor mistakes that were easily fixed, so it was a great success.

She went from that meeting straight into another meeting about the project! This was great as Kim and her counterpart in IT were really able to explain the project to people and the next steps we were taking.

After this meeting the IT person suggested that they sit down and finalise the details with the project for an hour or so! It’s really nice to have someone who actually knows about the project a lot more than Kim does!

By the time that was done Kim only had another 30 minutes left in the day! It just flew by! So she did the 3rd and final bit for HR and it went really well. Kim sent out one more email and finished at 5 on the dot.

Kim is really enjoying her new role, it has lots of challenges to pick up and great support from her teammates! She is feeling very happy and excited for the coming year!

We met each other from work and walked home in the beautiful sunshine.

We got home and Kim made a delicious pork meal, with a creamy mushroom sauce, potato hasselback & balsamic vegetables.

Once we finished eating, we walked the other way around the seawall at the perfect time of day where the sun was going down, so it was very beauiful! 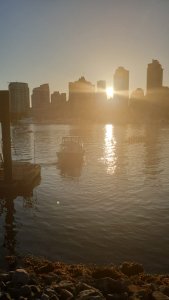 We got to the dog park and Kim went in to say “hi” to the dogs in there and then we walked back home to watch TV for the rest of the evening.