The interview didn’t last too long, but after it we realised we didn’t have much time to get ready!

We had breakfast and then both of us showered and got dressed into interview clothes.

We rushed down to the train station and got to where we needed to be with just a few minutes to spare!

Curtis is very interested in this role, so was looking forward to the interview.

He had to go to the 12th floor of a very nice building and the office was just as nice!

Curtis felt the interview went well and still has big hopes for the role.

Whilst Curtis was having his interview, Kim realised her shoes were very uncomfortable and a bit painful, so she found some cheap alternatives that don’t hurt her feet so much.

Kim had her interview about 1.75 hours after Curtis’ finished, so we went to get some lunch before she went there.

We just grabbed a Subway and relaxed there for a bit and then we made our way to the building Kim was interviewing in, which was also a nice building.

Curtis grabbed a coffee whilst Kim had her interview.

Kim’s interview also went well and she is very interested also…and a lovely office! Neither of the offices are far from each other, either, which is nice.

We got home and relaxed a bit and then for dinner we just had the same as the last few nights. The plan was to eat cheap and we have a lot of the pork, vegetables and rice left anyway.

We got quite hungry around 22:00 so we walked just 4 minutes down the road to a place called off the grid which is a waffle shop.

Curtis got a strawberry milkshake, which came with a waffle stuck in it and Kim got a chocolate ice cream and brownie cup with waffle, too. 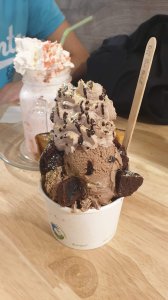 Kim also got a hot chocolate to take home.

Off The Grid | Vancouver,BC

We came back home, watched a bit of TV and went to sleep, sufficiently full!