We got the bus to the city and then walked from there. It was warmer today, but there was a breeze which helped.

We got to the museum and when we walked in, we were instantly struck with the smell of ‘old stuff’.

We later found out that the building was occupied from the 1700s by a pharmacist and then later was taken over by another pharmacist, before it was not used for a while and then bought and restored by the local council. 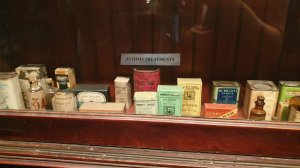 There was two floors of artifacts, namely tools and medicines which were used in the 19th century.

Something interesting was that all the liquids or solids within the bottles and jars are the actual substances that they say they are. This is particularly harrowing when the majority are alcohol or narcotics based, including opium and heroine! Some are even poisons.

We toured around by ourselves for a bit and then had a guided tour by the curator for around 45 minutes.

During this time, he explained about the history, what was used, why, side effects and all kinds of gross things, but also incredibly informative and interesting.

Towards the end of the tour, Curtis got incredibly warm and ended up fainting, which was dramatic for everyone around us! He was all ok though, Kim managed to catch him and he wasn’t any worse for ware. All part of the fun and games!

We wanted a coffee and a bit of food, so we went to Cafe Beignet again, but a different one. This one was much older and had a great look about it. There was also a man singing there, which helped with the ambience.

We shared some Gumbo, which is traditional soup made with chicken, rice and sausage…absolutely delicious!

Curtis had a key lime pie and we got some coffee too.

We headed home after here, once we had a short walk around. It was too hot and we didn’t really fancy doing anything more.

We got back home in record time, catching the transport perfectly! It took us just 15 minutes or so.

We got back and both had some admin to complete, so it was good to get that done.

We ate the remainder of yesterday’s pasta and were still hungry.

Luckily, we’d been told by our host about a few food trucks which were congregating by the library, just a block away.

We got to the food trucks and there were just a couple there, so nothing much to choose from.

We each got a crepe in the end. Curtis got a cinnamon one and Kim got a cookie butter one. They were actually great and from the crepe truck called Crépes á la cart

After this, we came home, chilled out and also planned what we will be doing tomorrow.