Ensuring we were all up for around 07:00, we got ready and bundled in the car to head towards the Kennedy Space centre.

We wanted some breakfast and Tom & Curtis were outvoted (they wanted McDonald’s) but the ladies wanted IHOP, so IHOP it was.

We got some food at IHOP, Tom, Kim and Curtis got cooked breakfasts and Abbie & Maggie got pancakes.

We left sufficiently full and got back on the road.

We arrived at the space centre and it was rather busy.

We got in and went right to the heroes section.

This area had a short video inside followed by a really well done 3D movie relating to the heroes of American space adventure.

We saw the exact panels used by the team for one of the space missions.

After this we took a brief look around the rocket garden and then around the nature section of the exhibits.

We went for the bus tour after we finished in the nature section. We got onto the bus pretty quickly and then were on the bus for 45 minutes.

We were shown multiple things, such as the giant building which rockets are assembled in, which has the biggest doors in the world and they take 45 minutes to open!

Once side of the building was open so we could see the area inside. 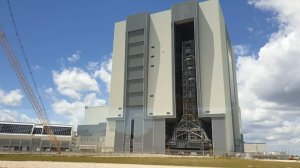 We saw the SpaceX area, a few launch pads as well as other construction areas.

Once we were finished with the tour, we hopped off the bus at the Apollo/Saturn V centre for more learning!

We got into a theatre and watched a brief video regarding some history and about a specific launch.

We got to experience, with the help of real panels from the control centre, what happens during a launch.

We looked at a lot of exhibits after this, including moon rock, pods from space, spacesuits and even an unused Saturn rocket which suspended above us in the main building.

We then had a bite to eat from the cafe there and went to a film at another theatre.

We saw a video regarding the first moon landing as well as an interactive model, which was an interesting way of doing it.

We had to wait for a while for the bus but they journey only took about 10 minutes to get back.

We had one building remaining to see which was the Atlantis building.

The first section we entered, after queing for a while, was regarding repairs being carried out on the hubble telescope with thanks to the Atlantis spacecraft.

We saw the video and then behind us was the actual Atlantis spacecraft, which is huge, and it has traveled over 250million miles in space!

After this section, we went to the shuttle launch experience.

We queued for a bit again and then stood in a line waiting to board the spacecraft.

We entered a real NASA launch simulator which is used by astronauts to prepare then for flying in a rocket!

We couldn’t film or even take our phones with us, but it was an amazing thing to feel. We got to experience the angles, G-Force & bumpy ride of the space shuttle launch.

We then left the park, insanely tired, and we then took the 1 hour drive back, via the supermarket.

We were all tired having been out for about 8 hours and we were getting hungry too.

Kim made the same dinner as yesterday and it was just as delicious.

We played Scrabble together, but Maggie is just far too good for any of us!

We then sat and watched an episode of Lilyhammer before heading to bed, tired.