We just had to do something film related, so we made sure we did just that.

The first floor was about Max Factor, both the man himself, the make up and the movie stars that used it.

We then moved to the next floor, which was in the basement, and was all things horror films and a whole section which were the prison cells from the Hannibal Lecter films. 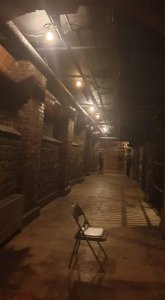 The next floor was all about the animatronic and models used in films. This was the most interesting section in the museum.

The final floor was not overly interesting, though there was a section with the batmobile which spoke all about batman.

There was also a section here which had a lot of old cameras, which was awesome.

We walked from here just down the road to Trejo’s Coffee & Donuts, which was created by the actor Danny Trejo. 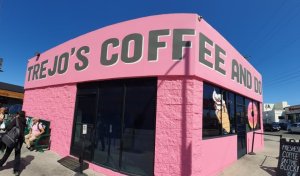 Curtis got a cappucino and we got a doughnut each.

Kim got one with cinnamon sugar filled with ice cream and Curtis’ was lime and sugar, like a margarita, which was great.

We walked from the museum for about 45 minutes and got to our first shopping mall of the day, which was the famous The Grove.

Kim was looking for a few things here, as well as just looking around as it was somewhere you are meant to visit in LA.

We walked around but we didn’t find anything of use, so we left the Grove and walked 20 minutes to the Beverly Center, which we bought Curtis’ shirts in the other day.

We got to the Beverly Center and weren’t getting too much luck with the shops, until Kim got to Forever21 where she was able to replace her flip-flops and get some clothes she was looking for.

We got hungry, so we stopped off at Fatburger which was a burger place recommend to us.

We each got a medium sized burger and Kim added cheese whilst Curtis added cheese and bacon. Curtis got onion rings as his side and Kim got chilli cheese fries.

Overall, the meal was disappointing. There was too much lettuce, the tomato slice was too thick and caused everything to slice around, the meat wasn’t staying together so crumbled everywhere, so overall it wasn’t great. We just saw that they are apparently rebranding to be called Skinnyburger…Interesting.

We got home and watched a few videos before taking on the mammoth task of packing. We leave LA by bus tomorrow morning, so we need to be ready.