We had to pay for the bus this morning, which was a change from yesterday!

We got into the centre and went straight to the actual first ever Starbucks.

We waited in line to get into the store and before long, we got in!

It is a little tight and crowded and you cannot sit inside, but we got our coffee and headed back outside.

We sat and had our coffee on a bench with a great view of the mountains!

We next planned to go to the Space Needle, so we walked towards it.

Once we got there, we got some good photos of the space needle and then realised we didn’t have enough money on us to go in, so we’ll have to do it another day, but we did have other plans anyway!

Instead, we went to the MOPOP (Museum Of Pop Culture).

This has all things from video games to movies of different genres to TV shows and also music.

There were a few different sections within the museum and the first we came to was the Sci-Fi section, with a brief stop off at the video game area!

We played a few indie games and it felt like we were right back in the UK at EGX!

The science fiction section had mostly costumes that had been worn for science fiction characters, such as enemies from Doctor Who, the hoverboards from Back To The Future as well as Star Wars and Star Trek items.

We accidentally went through to the next area which was the horror section.

It was similar to the Sci-Fi section, but with horror. There were a lot of props as well as things like the costume from Friday 13th.

There was an area which had fake dead people wrapped in sheets and hanging, which was quite creepy!

We moved on upstairs to the fantasy area. This spoke about movies and games based in the fantasy genre, the big two it mentioned being Harry Potter and Lord Of The Rings.

There were more items on display from both of these films, as well as other items.

There was a whole floor on the band Pearl Jam, from Seattle.

We had not heard of them, but we enjoyed reading about them as well as looking at their memorabilia.

We left the museum after this and found somewhere delicious for lunch.

Just before we left for lunch, we found the International Fountain, which is just a big fountain which is synchronised with music.

We went to a place named Michou.

This place was fairly busy when we arrived but it was an Italian style deli with a lot of, large, sandwich options. 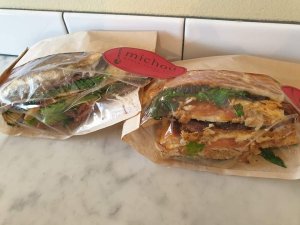 Curtis got a roast chicken & chipotle sandwich and Kim got a beef and cheese sandwich. Both sandwiches were delicious, so we ate those up and then got out the way.

We walked down to the cinema to watch the film Fighting With My Family.

Neither of us realised this was based on a true story and then when Curtis realised who it was about, it all made sense!

We really enjoyed the film, actually. We aren’t sure how anyone from any other country would understand it as it has a lot of British humour and slang, but it was good for us!

Fighting With My Family

We got back home via an Uber and had leftover Thai green curry, which was, as last night, delicious!

We watched some TV and did some research for tomorrow and future travels before hitting the hay.