Waking at 05:45, we all hopped in the car with Kim’s family’s bags and drove to the airport. There was no traffic, but we did need to stop for some fuel on the way.

We got to the airport and it was pretty busy! We walked all the way to the correct check in location and left Tom & Maggie there. It was pretty emotional for Kim!

We deove back and we were very tired. We had a late checkout from the hotel, so we didn’t have to leave until 12:00.

We slept when we got back until around 09:45. Curtis then had a coffee and we got packed and did a bit of admin.

We eventually checked out at 12:00 and moved all of our baggage to the car. We walked to a coffee shop in the centre of town, got a ham and cheese croissant each and a coffee for breakfast. 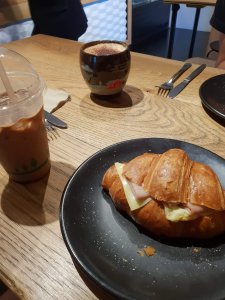 We left the coffee shop and Kim did a bit of shopping around the city centre. Once Kim had finished, we walked up to the Visa Application Centre for Curtis to get his biometrics for his visa completed. We turned up 15 minutes early but were seen anyway and had it completed just after the original planned time, which was a result.

Once we finished there, we went to get Curtis’ hair cut. We went to his usual place and were told it would be 20 minutes. We waited for 45 and were then told it’s another 30 minutes and the were 2 people ahead. We didn’t want to wait any longer so we left and went back to the hotel.

We picked up the car and drove to our next accommodation.

We are officially back in hostel life! At least for the moment. We got to the place and no-one was there to check us in. We called and they said we cannot check in until 16:00. We spoke with them and asked which room we are in and we were allowed in. We went to the room and it was disgusting with bugs everywhere and also a lot of mould, so we asked to move to another room we had seen which looks nicer.

Once we were in the new room, we waited to get our key at 16:00 and then had fun with them regarding payment…we went to the shop to get some drinks as we were very thirsty!

Once we got back, we moved all of our bags in and Curtis started to feel a bit unwell so we relaxed for a bit until he felt better.

We went out for a late dinner at a cheap Italian place which was OK but nothing special.

What was special was the sky after our dinner during our walk around!

We got back and did more admin as well as catch up on some TV.

It’s weird, and certainly not as nice, to be in a hostel again, even if it is a private room (shared bathroom)!