We were up early(ish) today and ready to go out.

We had to drive to Kawarau Bungy Centre, but firstly we had some time to kill, so we went into the centre of Arrowtown for some walking around.

Whilst there, there was a small Sunday market going on, which we had to go and see! There was a Swedish food stand, so we got a cinnamon bun each. 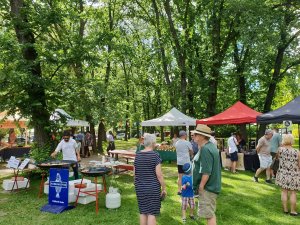 We walked around a bit more and Tom got a pie, then we had to get back to the car and drive to where we needed to be.

We arrived and got checked in. This meant we had to get weighed, get our weight written on our hand and on the other hand we got a number written as well as an indication of what we were doing.

We eventually got onto a bus to take us up to Nevis Canyon. The ride was bumpy and down some tiny, tiny mountain roads, until we eventually reached the top.

Unfortunately, it was on a ‘wind break’ when we arrived, but we could still look around and see how incredibly high up we were!

Eventually, after about 3 hours of waiting for the wind to die down and for them to get all other people completed, we got harnessed up and sent right out to the swing.

It became windy when we got there, so it was briefly delayed again, but a few people went and then it was our turn! We went together and then Kim went again but with her mum. 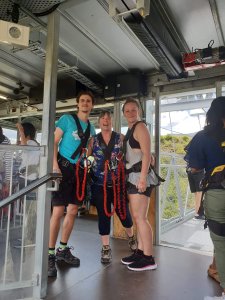 The swing is a very thin swing which you are clipped into and you then do a very sharp drop 70m downward and then swing 300m, before swinging back a little and then you get pulled back up.

Kim loved this and Curtis didn’t mind the actual swing but the drop was not too fun!

Kim went again with her mum and still loved it then! Maggie had a great time.

After our swings, we walked back up but Kim wasn’t done there. Right after, she had to go right to the bungy area where she was doing a 134m Bungy, which is the largest in New Zealand!

Kim had a briefing and then was taken across onto a suspended platform in a small cage with a few others, ready to jump.

Kim was all fine until right before her jump, where she struggled to wave and smile at the cameras whilst standing on the edge. Kim did a terrific swan dive off the ledge and bounced a few times!

We got the bus back to where our car was and then drove on up to Oamaru, with a stop on the way for some food.

Once we got to Oamaru, around 21:00, Kim read that there should be penguins near the harbour, so we went down to try and find some.

After an hour or so of waiting for penguins, we didn’t see any and were asked to move on from where we were standing. We were able to see some seals, though!

When walking back to the car, someone pointed out two penguins who were really close! We were unable to get photos as the lighting was awful, but they were tiny and cute!

We eventually got back and were all tired. We showered and then headed to bed. We are driving straight to Christchurch tomorrow.