Today Kim was on the morning shift again!

She did the usual set up and got on with her day. Kim spent most of her day getting the regular admin done. During the mid morning Kim did an accidental and impromptu coffee lesson for one of the guys she works with. It was good fun to try to see how much in depth stuff Kim remembered from being taught many years ago when she started work at The Redbridge. It turns out it was quite a lot!

Kim took a phone call for a possible large booking which is very exciting!

At the end of her shift, Kim hung around for someone who got caught up in some traffic, those are the joys of one road in and out!

When Kim got home she relaxed and it was perfect! She was then texting a friend about a dessert that they had made and wanted Kim to try and then a few minutes later they had made dinner plans and she was on her way!

One she got there, Kim started dinner, just a simple pasta and meat sauce, nothing too exciting!

She bought over the wonderful dessert and a cider each! So the two of them just sat and talked for hours.

After a little while Nicola came home and joined in on the chatting! It was such a brilliant evening, nice and relaxing.

Nicola and Kim decided to try to give the fridge another go. It started up perfectly and was silent. Then 30 seconds later the beeping started again! Kim then started looking for parts for what they assume is broken where she came across a helpline. Kim called the helpline with the hope of being able to get them to listen and tell us which part needed to be replaced, unfortunately this was not the case and they have had to arrange for a technician to come out. The worst part is that won’t be until next Tuesday! This puts us all back in the same position of being fridge-less! At least we are making progress with getting it fixed!

Kim then relaxed a little more and had a chat with Curtis before heading to bed!

Curtis started the day right with one of the bacon and egg paninis from the Cafe down the road and got right to work when he arrived at the client.

There was some things to finish up from last night and then a while large team to migrate, so that was the main focus.

Curtis sat with someone for 2 hours to answer done questions and then get on with the migrations.

For about an hour in the afternoon, Curtis got through some of the teething problems and then he and Colten went for ‘lunch’ at 17:00!

Curtis got a Subway again and then went back to the hotel and chilled out until 19:00 at which he started to work again, but not doing too much!

Tomorrow should be a less busy day but still busy none the less.

Also, there was a beautiful sky this evening in Wellington! 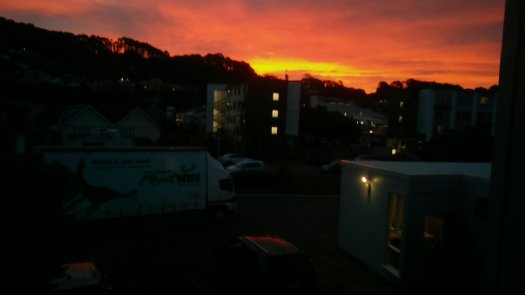