Today Kim was on a much later than usual shift, she was due to start at 4.

Kim spent most of the morning sorting and organising stuff for the upcoming weeks. She was also car hunting and has found one she thinks she likes. She is hoping to pick it up on Monday!

Kim then headed into work a little earlier to get a bit of admin done and help set up for a function tomorrow.

Kim ended up getting in too early, got what she needed to get done finished and then she clocked out and headed to a shop for 45 minutes before her actual shift started!

Kim worked on the bar for the evening which kept things fast paced and interesting. As it was a Friday night it was pretty busy!

At he end of her shift Kim ran home and quickly changed before heading to the airport to pick up Curtis.

Curtis woke up early, around 07:00, to get breakfast and start the day.

Once breakfast was done, Richard called the couriers and they said that the package that Curtis and Richard were waiting for had been delivered and was outside the office, so they went to see if that was the case. There was a package, but it was a laptop and not two PCs which they assumed would have been in the same package! After calling the depot they were able to pick it up as it wasn’t going to be delivered until Monday otherwise.

Once it was picked up, they headed back to the office to get started.

Most of the day was spent there sorting out 2 machines and providing some training whilst being followed by Whisky the cat! 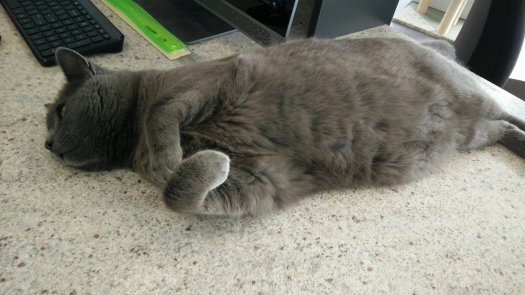 Curtis and Richard left the office and went to the main Op shop in town to setup a PC there and train the user.

Curtis setup another machine there whilst doing this but it took a long time to complete so it was left on to remote onto next week.

Time ran out so Curtis had to get to the airport. When he got there he got a lamb and mint pie as well as a cappuccino.

The flight was delayed and therefore Curtis missed his flight but was connected onto a flight 30 minutes later.

This flight was painless and he got back into Auckland at 21:50 where Kim was waiting for him!

We drove home and stopped at McDonald’s on the way to grab some food.

We got back and watched some TV and sorted out a few things for moving in this weekend!