We started the day nice and early at 06:30. We had nice freezing cold showers and then sat down and ate our pain au chocolate and drank some ice coffee!

The taxi driver arrived a bit late as he got lost, but eventually he did arrive and we were on our way.

The Soi Dog Foundation is a non-profit organisation that looks after dogs that are either homeless, abandoned, hurt or were part of dog meat trading. Dog meat trading was killing a lot of dogs, so to save them from that, Soi Dog rescue them with the sole purpose of rehoming them. Most of the dogs get rehomed abroad and not within Thailand.

There are over 700 dogs there and it is a large area! There is a state of the art dog hospital with everything that could ever be needed, including x-ray machines and a maternity ward!

As mentioned, we arrived early and were met by a Welsh lady. We were offered free tea and coffee and were able to go and see the cats! There is currently a small cat hospital with adoption rooms, but as they are getting a lot of cats, they are currently building another building! 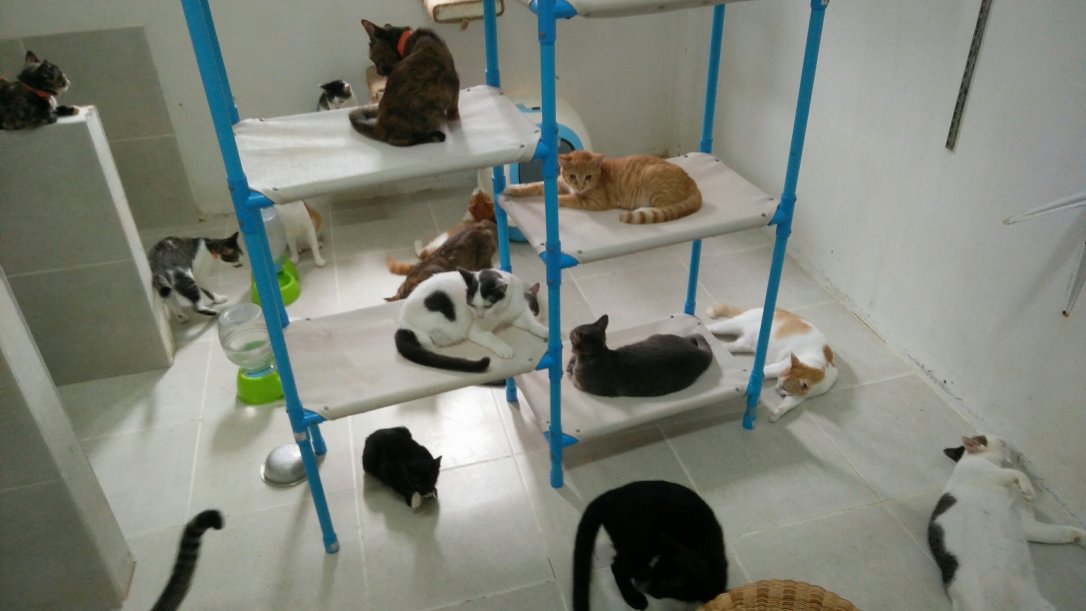 We finished with the cats and got back to the reception where we were met by Ian who was our guide. We were informed about what they do here and how it has helped the population of dogs around Phuket and Thailand in general. After this, we went for a walk around and were shown all of the areas as well as which dogs we can go and see, why certain dogs are in certain areas and all of the interesting information regarding some of the specific dogs.

Once the tour was over, we were allowed to walk around and see whichever dogs we wanted (providing they were enterable). We started by going to see the puppies…We got very muddy! These puppies were full of life and jumping all over us, which was great fun! We spent some time with these puppies and got very dirty, before we headed to see OAP dogs!

The OAP dogs are exactly what they sound like…They’re old dogs! Soi Dog doesn’t euthanize a dog if it isn’t required, so they keep older dogs and sometimes they got adopted!

We went into one of the areas and a lot of the dogs were blind. The rule in these areas is that you let the dogs come to you rather than going to them as they are older and some are blind, so they may feel threatened. Unfortunately, we spent most of our time in this area trying to get a blind dog and 2 others back into the proper area as we accidentally let them into the area between the two gates…This was stressful!

We left this one and went to another OAP area, which was a little more interesting. There were some older dogs with a little more life that wanted some stroking.

We went nextdoor to another area with some small dogs in. Most of these dogs were not interested, but one was very interested.

We left this area and went to see the big dogs. We couldn’t go into this one but we were able to see them.

We had a bit of a chat with Ian again who was very knowledgeable and a kind person. The Soi Dog Foundation are always looking for volunteers, adoptees & donations, so take a look at their website for more information! Visiting is free, too!

Our taxi arrived and picked us up (which was good they let us as we were covered in mud!) And took us to Phuket Elephant Sanctuary.

We got to a little restaurant area which we got free tea/coffee and soft drinks, as well as snacks! We got to sit around for 30 minutes to take in the jungle feel and see an elephant which was roaming around.

Once we finished our snacks, we were taken to the main table in the restaurant where we were told about what the sanctuary does, how it was formed and then shown an informative video about the elephants that they have and their stories as well as how they treat them in comparison to how they used to be treated. This video also shows how to deal with the elephant when it approaches you.

We were then given wellies and taken down to the elephants. We were stood very close to them and got to see them just having fun and eating!

We saw the blind elephant as well as a herd of elephants which we walked back to their feeding area! One elephant interupted a talk we were having and just came into the shelter we were sat in!

Once we finished watching the elephants and walked them to their feeding area, it was our chance to feed them! They love banana, watermelon & cucumber, so that’s what they got!

This was the end of our time with the elephants, but the day didn’t stop there! We then got a dinner which was a vegetarian Thai buffet! We had curry, stir fry, spring rolls and all kinds of incredibly tasty food! We sat and ate for an hour before jumping back in the car and heading back to the office.

The Phuket Elephant Sanctuary is also looking for volunteers & donations so ensure you look at their website for these opportunities and for pricing for visits!

We noticed how bad our clothes smelled and we had some laundry to do, so we thought that doing that was a good idea, so we walked towards the beach and got that sorted, so we get that back tomorrow!

We have some plans for tomorrow still, but nothing too taxing!